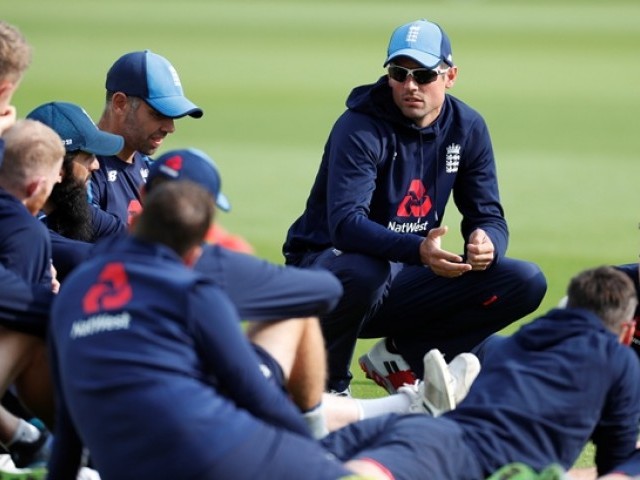 SOUTHAMPTON: Alastair Cook will hope history repeats itself in the fourth Test against India at Southampton starting on Thursday.

England’s all-time leading run-scorer arrives at Hampshire’s headquarters having managed just 80 runs in five innings this series, and an average of 19 in eight Tests this year.

It is not the first time the 33-year-old left-handed opener has turned up for a Test against India at Southampton in a poor run of form.

In 2014, the then England captain was in the middle of a career drought that saw him go two years without a Test century.

Then, as now, England — who lost by 203 runs at Trent Bridge last week — were coming off the back of a heavy defeat by India, the tourists having triumphed by 95 runs at Lord’s.

That proved a significant number in Southampton too, with Cook making 95 in front of a crowd who had cheered him to the crease on the first morning and, unusually, given him a standing ovation when he reached fifty.

Cook, who labelled that first innings as the “the most pressure I have been under as a player,” made an unbeaten 70 second time around to help England to a 266-run win that sparked a come-from-behind 3-1 series victory.

“It was brilliant, wasn’t it?”, Joe Root, Cook’s successor as England captain, told reporters at Southampton on Wednesday as he cast his mind back four years. “I remember being sat in the dressing room almost a little bit emotional for him. That was the feeling within the group, how much he means to the squad. We are fully aware of what he’s capable of doing. It was nice to have that support heard from outside the four walls of the changing room.”

He added: “It was a shame he didn’t get a hundred. That was a big week for him in turning round where his game was at. He’s always liked playing here so hopefully we can see some big runs from him again.”

Cook passed 50 in all four of his first-class innings at the ground: 55 against Sri Lanka in its inaugural Test in 2011, and 84 for Essex earlier this season.

Despite their thumping loss at Trent Bridge, England are still 2-1 up in the present five-match series but, on a personal level, the situation is an all-too familiar one for Cook.

For all that he interrupted a run of low scores with a brilliant 244 in the fourth Test against Australia at Melbourne in December, Cook’s continuing run in the side — he has played in a world record 157 consecutive matches at this level — can partly be explained by the failings of others.

Since Andrew Strauss retired in 2012, Cook has had 12 partners at the top of England’s Test order, with current incumbent Keaton Jennings now in his second stint, and there was speculation his run of Test appearances might be halted by the birth of his third child.

The fact England have been 100 for for four or worse in half of their last 62 Test innings is proof that their top-order woes are not just Cook’s problem alone, but the lack of a sound opening partnership has increased the pressure on the likes of number three Root.

Nevertheless, the current England skipper is convinced Cook still has some big innings left in him.

“I’d love nothing more than him to go out and make a big double hundred,” said Root. “Whenever he’s backed into a corner, he does something rather special.”