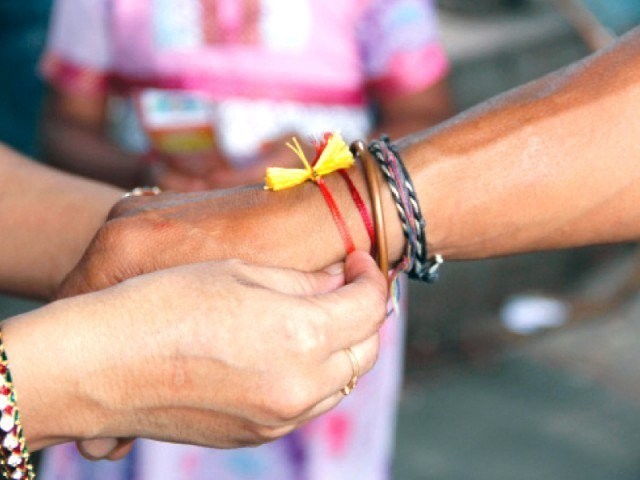 MULTAN: Scores of Hindu families on Sunday celebrated ‘Raksha Bandhan’ festival, which symbolises the bond of love, protection, trust and compassion among siblings in a family.

“In the Raksha Bandhan ritual, a sister ties a ‘sacred’ thread around her brother’s wrist and seeks his protection,” according to Hindu community leader Shakuntla Devi.

She added that the sister also puts a ’tilk’ on the forehead of her brother which is called ‘ashirwad’ (blessing-prayer). She said that hundreds of Hindu families lived in Multan in various localities and some other cities of the region. The origin of the festival is unknown, though mythology is replete with stories that talk about the celebration. One such story relates the bond of trust between King Bali and goddess Lakshmi. After being defeated thrice, King Bali in what was a boon to Vishnu, confined himself to his house.

Lakshmi, in order to get her husband back, tied a thread around King Bali’s wrist and in return, asked him for a token to mark the bond of compassion and faith. King Bali couldn’t refuse and had to send Lord Vishnu to her.

Another story goes like this: one morning, when Lord Krishna was flying a kite, he cut his finger with the kite string. Draupadi, on seeing blood coming out of his finger, ran to him, tore a piece of cloth from her sari and tied it on his bleeding finger. Lord Krishna was so touched by this act that he promised to protect her from all evils forever in return.