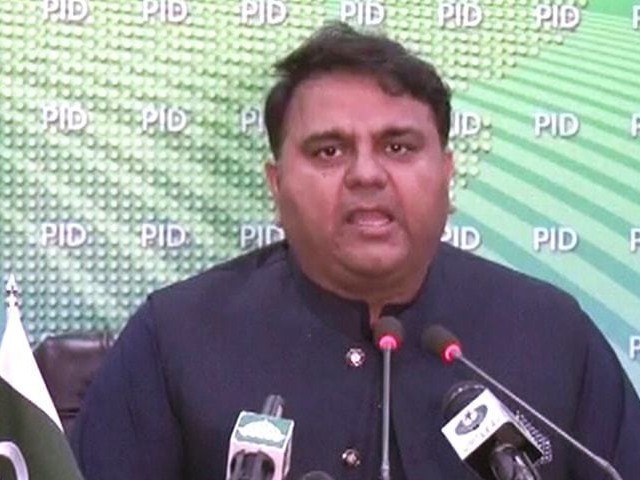 The cabinet that met also decided that Prime Minister Imran Khan would not use his special plane for foreign tours. However, Information Minister Fawad Chaudhry later clarified: “For domestic travelling, the protocol (use of special plane by the PM) will not be changed”.

FM confirms Pompeo will visit Pakistan on Sept 5, calls ties with US ‘important’

The government also decided to not withdraw weekly holiday on Saturday. The alleged attack on the Ahmadi community’s place of worship in Faisalabad also came under discussion during the second cabinet meeting in which authorities concerned were directed to nab all those involved in the incident.

The minister was briefing the media about the important decisions taken during the meeting.

‘Abolition of discretionary funds’ was on the top of the seven-point agenda placed for discussion before the federal cabinet.

“Today cabinet has taken a historic decision. It has been decided to eliminate all kinds of discretionary funds at the disposal of the president, PM, ministers, MNAs, etc,” he said, adding: “If a legislative amendment is required for the purpose the government will introduce it soon.”

The minister said from now on, all important developmental projects would be placed and discussed in parliament and later funds will be released. “The PM’s only motive behind the decision is to regain public’s trust in the government,” he added.

Chaudhry said during the last financial year of the outgoing government, a whopping Rs51 billion out of public money were spent under the head of discretionary funds – Rs21 billion by jailed former premier Nawaz Sharif, Rs80 million by President Mamnoon Hussain, and Rs30 billion by several MNAs.

He said the government also decided to put an end to the practice of using supplementary grants.

“Only in the last financial year more than Rs1 trillion supplementary grants were released. This amount is beside the budget approved by parliament.”

He said unfortunately the previous governments spent public funds in a way if it were their own money and not of taxpayers.

The information minister also criticised the announcement of mega development schemes by the former PM Sharif in different cities without conducting any studies or keeping in mind the real needs of these cities.

Prime Minister Imran Khan also announced during the meeting that he would not use a special plane meant for head of the state for foreign tours. He also surrendered his entitlement to the first-class travel tickets for international tours.

However, Chaudhry later clarified through a tweet that PM would use special plane for domestic travel.

“[The] prime minister will travel in club class. Similarly, first class air travel facility has also been withdrawn from president, foreign minister, the NA speaker, Senate chairman, Chief Justice of Pakistan and Chief of Army Staff. They will also be entitled to club class only,” he added.

During the first cabinet meeting held on August 20, the PM banned all the non-essential foreign tours by his ministers and senior bureaucrats.

To a question, Chaudhry said the cabinet had also decided to abolish ministry of Capital Administration and Development Division and its functions would be devolved to relevant departments.

He said the state-run media had been directed to give proper coverage to opposition parties and for the purpose, one member each from the Pakistan Peoples Party (PPP) and the Pakistan Muslim League-Nawaz (PML-N) have been included in editorial board of the Pakistan Television (PTV).

To another question, he said Nawaz Sharif and his daughter Maryam’s names were put on the Exit Control List on the request of the National Accountability Bureau.

“Similarly, if a court of law directed the government to take any action against former president Pervez Musharraf, the government will implement such orders,” he said in response to another question.

He said a task force formed to bring back looted public money from abroad will brief the cabinet about ways and means to complete that task during the next cabinet meeting scheduled for Tuesday.

To a question, he said the PTI senator Azam Swati raised the issue of the failure of the Election Commission of Pakistan’s (ECP) Result Transmission System (RTS) during the July 25 polls.

“Like the opposition parties the incumbent government also wants a free and fair inquiry into the matter and soon Swati will brief media on the issue,” he said.

Despite Pakistan anger US sticks to Imran-Pompeo readout, hails contact as ‘good one’

The Information minister said recent attack on an Ahmadi place of worship in Faisalabad was also discussed during the meeting, adding that Faisalabad’s regional police officer has released a compressive preliminary report on the incident.

“A law and order situation emerged after a cock fight. The Incident lacks any religious dimension. Contrary to the news being spread on social media, the fact is that a fight erupted over a petty issue between two opposing groups. Six people from both sides have been injured in the incident,” he said.

The cabinet also decided to carryout forensic audit of all mass transit projects initiated in Lahore, Islamabad, Multan and Peshawar as well as the Orange Line project in Lahore.

“If something wrong is found in these projects than FIA [Federal Investigation Agency] would be asked to conduct proper investigations,” he said. “However, no decision is taken to halt operations of the metro bus services until completion of the audit. All the projects initiated by past government, including Orange Line train, will be completed at earliest.

Talking about another agenda item, Chaudhry said the cabinet has also approved initiation of an urban tree plantation campaign especially in provincial capitals particularly Karachi. In the next cabinet meeting, the PM’s adviser on Environment will brief on this project, he said.

The government has also revised public offices working hours with a decision to maintain two public holidays in a week –on Saturday and Sunday. Daily office working hours have been changed from earlier 8am to 4pm to 9am to 5pm.

To a question, Chaudhry said the PM has expressed concern over excessive load-shedding during Eid holidays. He said according to the Water and Power Development Authority (Wapda) it is more of a matter of faulty distribution system.

“The PM has sought a detailed presentation from Wapda over the issue of distribution system,” he said, adding that the next cabinet meeting will be held on August 28 (Tuesday).