A Muslim-American graduate student of Harvard University was subjected to additional screening by United States airport authorities on Thursday and was forced to reveal her menstrual pad, Huffington Post reported.

The incident took place while the student was travelling from Boston to Washington DC for a speaking engagement.

The victim, Zainab Mercant, a US citizen and also the founder and editor of a multimedia web page Zrights Studios, had noticed a pattern in her travel experiences and therefore expected Transportation Security Administration (TSA) to pull her aside and rummage through her bags.

However, the airport security staff unexpectedly pressured her into private screening. Despite informing them that she was on her period, they demanded that she showed them her menstrual pad.

The TSA has repeatedly questioned a Muslim journalist about her religion and her opinion writing criticizing government policies.

Speaking to HuffPost on the matter, Merchant said she had to comply because if she didn't, "state police would intervene". After the harrowing experience, she asked TSA staff for their names and badge numbers to report the incident but they didn't comply.

The rights champion revealed that she had been subjected to numerous such instances over last two years. According to American Civil Liberties Union (ACLU), Merchant had undergone series of checks which are "intrusive, humiliating searches — often in ways that appear duplicated and unnecessary — every time she has sought to board an airplane or reenter the US.”


Following the latest experience, the ACLU lodged a complaint with the Department of Homeland Security and demanded putting an end to such screening. The civil liberties body believed that this was an outcome of her being placed on a government watch-list. 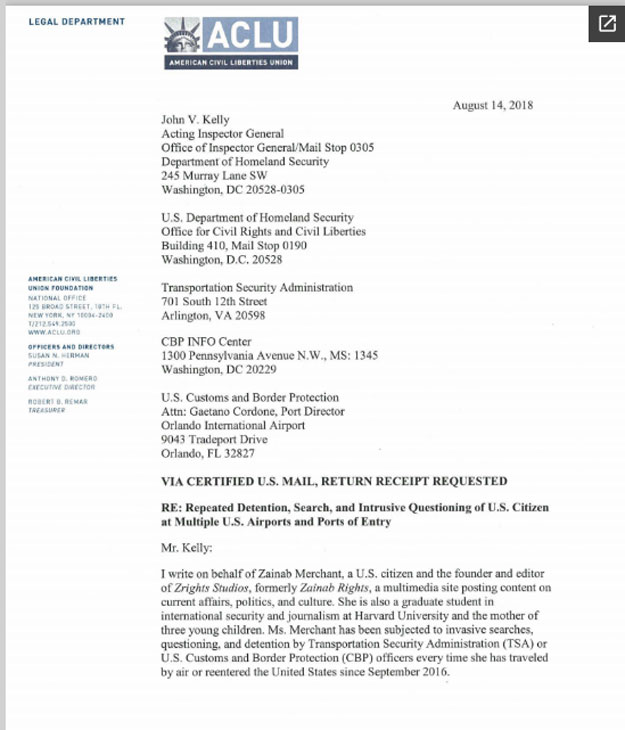 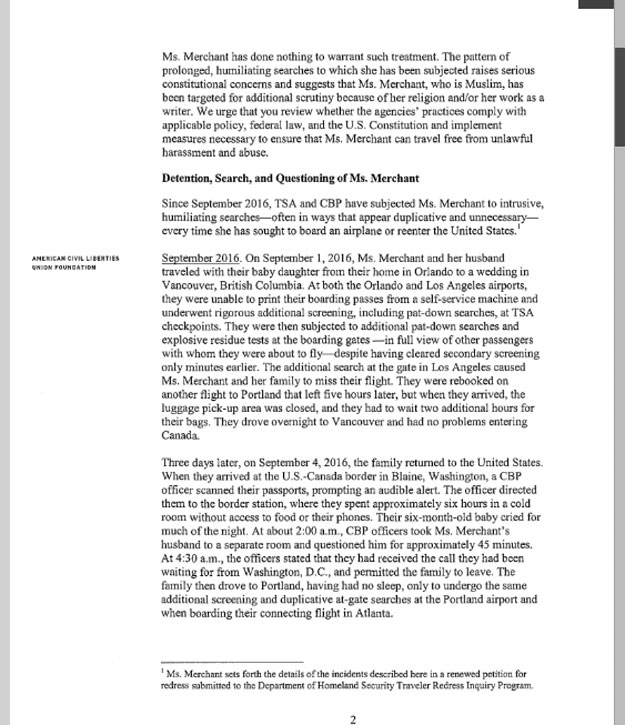 Senior Attorney Hugh Handeyside, who was dealing with Merchant's complaint revealed that she had been subjected to excessive searches at least 10 times. The complaint to ACLU also comprises incidents whereby TSA called in an explosives unit to rummage through her belongings.

In the past, border officials have interrogated her about religious beliefs and thoughts about Islamic State; and about why she criticised US government policies — all of which raise First Amendment concerns, the ACLU reported.

Handeyside told HuffPost that they were sure that this wasn't only happening to Merchant; and that there were others from Middle Eastern and Southeast Asian communities who were undergoing the same. Being on a state watch-list was a point of concern for many Muslims and they spoke extensively about hurdles they faced because of it.

Australian Muslim activist ‘kicked out of US’


Merchant, who had been trying to understand why she's on the list in the first place had written to members of Congress requesting for help. Then, she filed multiple requests with the Department of Homeland Security’s (DHS) Traveler Redress Inquiry Program, which is meant for people who undergo lengthy searches at airports.


When asked, the DHS responded saying that they could "neither confirm or deny" whether she's present on any such list. Merchant also applied for Global Entry, which is part of a Customs and Border Protection Program meant to expedite clearance for travelers. Unfortunately, her application had been turned down.

The ACLU has urged that an investigation should be initiated into the conduct of TSA regarding Merchant's case. Senior attorney Handeyside added that it's essential for authorities and courts to understand that repeatedly singling out someone is unhealthy for their mental state. On the occasion, Merchant said that she's being singled out for speaking for her rights and that she suffered from social exclusion. She reiterated that this is a result of being placed on some watchlist.

While she hoped that her name would be cleared, she reiterated that this would not hinder her from exercising her right to free speech, neither would it keep her from fighting for them.


This article originally appeared in the HuffPost.

Bunny Rabbit | 3 years ago | Reply the security chaps are only doing their duty. there is nothing personal. If every one who is scrutinized for checking starts filing cases, then there is no end to it .
Replying to X
Saved ! Your comment will be displayed after the approval.
Error !
Error! Invalid Email.