Hussai­n’s side make comeba­ck after being 1-0 down to beat Nepal 2-1
By Natasha Raheel
Published: August 19, 2018
Tweet Email 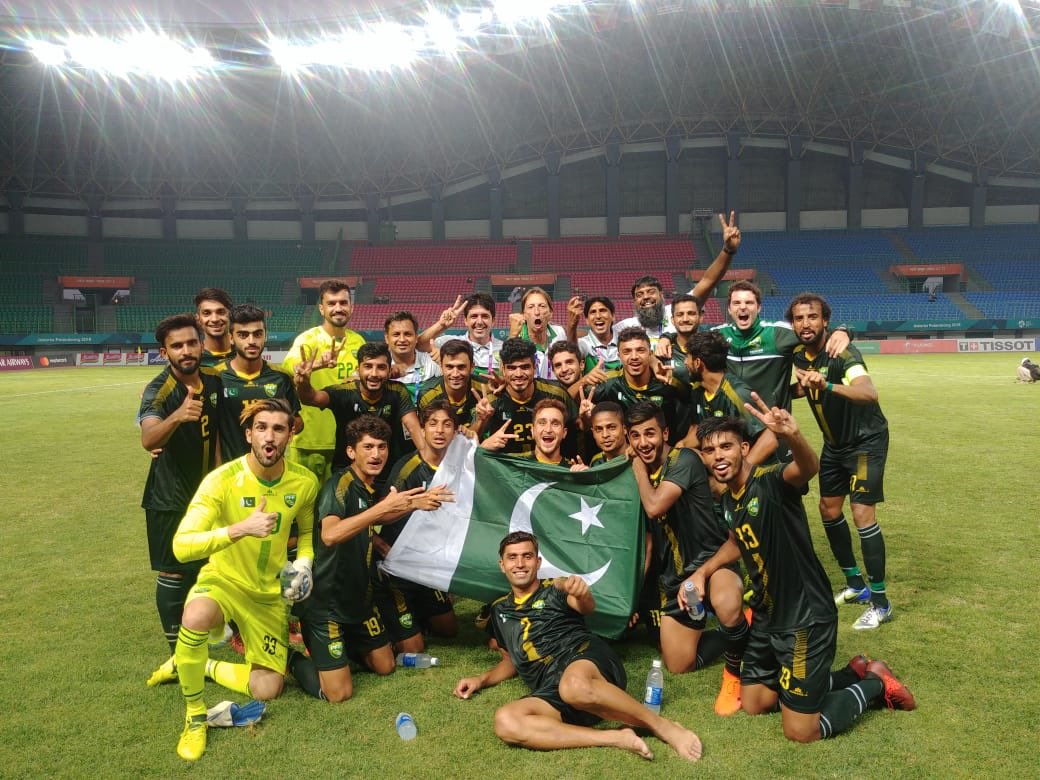 The team made things impossible for themselves in an already dreary record at first when they scored an own-goal in the 12th minute, a mistake by Shahbaz Younus.

But they were dominant in the second half as Muhammad Bial scored in the 54th minute and then captain Saddam Hussain sealed the win courtesy a penalty in the 72nd minute.

The win has brought hope for the country to progress to the knock-out round, however, out of the other nations Pakistan has the worst goal-difference of -6, as they were thrashed 3-0 by Vietnam 0 in their first match and then lost 4-0 against Japan on Thursday.

Pakistan has only ever won three matches at the Asain Games football event now, the other two being in 1954 and 1974.

The rules of fielding the teams at the Asian Games had changed in 2002, as the participating nations can field only three seniors players now, and the rest of the squad should be U23.

Dark side of the win

While the victory may be a great consolatory moment for Pakistan, but it has its cost as the Pakistan Football Federation (PFF) did not send any physio or doctor with the team, and went ahead by sending a masseur instead.

This means that if any of the players would get injured they will not have instant access to doctors or physios to treat them. The PFF will be relying on the host nation’s physicians. And like in the past, the players, if they pick any injury, will get back home without any support or back-up plan for them.

Earlier the PFF had been extremely furtive with their selection of the players and sending the squad to the games, without ever publicising it. The team only had a tour to Bahrain for training where they played the local club teams.

Earlier on the Asian Games website too, the Denmark-based Yousuf Ijaz Butt was named as the goalkeeper, but the PFF sent Saqib Hanif in the squad.

Similarly there are question raised on other players too who made to the team as the PFF’s new coach, Brazil’s Jose Antonio Nogueira never revealed the criteria for selection, and the federation’s technical director Shahzad Anwar is accompanying the team instead of a physio.

Pakistan are ranked 201 in the Fifa ranking and this was their first tournament since March 2015, when the team last played the Fifa World Cup qualifiers against Yemen, and lost.

Fighting with the with the ex-captain

The PFF’s offical Sardar Naveed Haider has been accusing former captain Kaleemullah, who became the first Pakistani to play at the United Soccer League (USL) with clubs like Sacremento Republic and Tulsa Roughnecks, of being greedy and unpatriotic for ditching the national side for the club football in Turkey.

However, Kaleemullah had been purposefully subsided by the federation for speaking up against PFF’s unprofessionalism.

In a fresh spat the controversial congress member, Haider, also the Punjab Football association president, claimed that Kaleemullah cannot justify his move to Turkey, however, the PFF is confused with in.

Kaleemullah had gone to the national training camp before the Asian Games, where his name was not in the list and was later included only to be struck out again.

Meanwhile, Kaleemullah is adament that he wants to play for the country at the Asain games, and now at the upcoming South Asian Football Federation Championship, if the federation calls him.

But more importantly he shed light on the issue of player-care.

“Our federation doesn’t provide any facilities,” Kaleemullah told The Express Tribune. “He had predicted Pakistan to play well against Nepal, however.

“We play against the Saff teams well, because that is all we prepare for. We can’t play Japan and Vietnam because we are at the lowest level of the football in the continent. We don’t get to play among the top-tier teams anyway. We prepare for Asian Games too like we prepare for the Saff Championship.”

Kaleemullah added that at the end of the day it is the players who make the difference but they are out-powered against nations like Japan because the federation does not provide good diet for the players, they are worried of doing their own laundry after the matches.

“The diet we have, you can’t win against Japan, even their U21 team by having ‘daal-chawal’, and worry about washing your clothes after the matches so that they are available for practice the next day. It does not work like that. I also would think when I was in the national team that this is how it works, but now that I’ve had the exposure of playing for international clubs I can see why we don’t do well in football. It is the federation that has no idea how to provide the players with facilities and professional training,” explained Kaleemullah.

Instead of paying attention to Kaleemullah’s pleas, PFF is accusing him of being unpatriotic. The Technical Director had said previously that Kaleemullah was not physically fit; however, he has been inducted by Turkish football club.

“I’m not scared of PFF anymore, I see what they have been doing,” said Kaleemullah. “Other players are stuck; they’ll pay for speaking up. Like maybe I’m paying by being out of the team. Despite everything I still want to play for my country.”