Econom­ic cooper­ation, partic­ularly over energy, was also billed as a centra­l theme in the discus­sions
By AFP
Published: August 19, 2018
Tweet Email 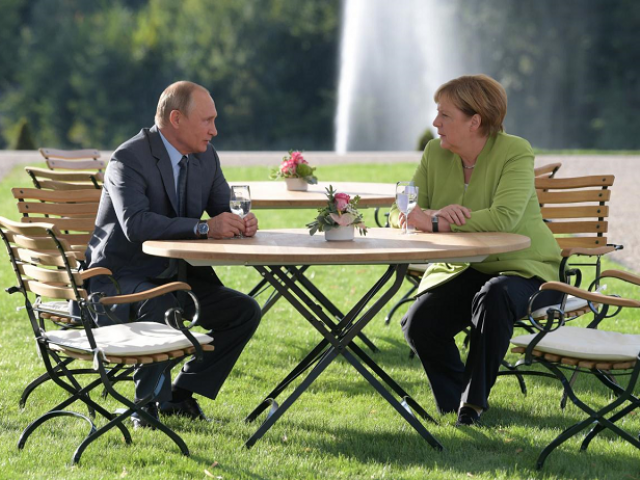 BERLIN: Russian President Vladimir Putin on Saturday called on Europe to financially contribute to the reconstruction of Syria to allow millions of refugees to return home.

“We need to strengthen the humanitarian effort in the Syrian conflict,” he said ahead of a meeting with his German counterpart Angela Merkel at the government retreat of Meseberg castle 70kms north of Berlin.

“By that, I mean above all humanitarian aid to the Syrian people, and help the regions where refugees living abroad can return to.”

There are currently one million refugees in Jordan, the same number in Lebanon, and three million in Turkey, Putin said.

Germany has accepted hundreds of thousands of migrants since 2015 – the height of the migration crisis – which has weakened Angela Merkel politically and split the European Union. “This is potentially a huge burden for Europe,” Putin said.

“That’s why we have to do everything to get these people back home,” he added, emphasising the need to properly restore basic services such as water supplies and healthcare.

Merkel said the priority in Syria was “to avoid a humanitarian catastrophe”, but did not give any further details.

Also on the agenda for the two leaders is the Ukraine crisis, which “unfortunately does not advance at all”, Putin said.

The Minsk agreements, a peace process sponsored by Germany and France aimed at ending the conflict in eastern Ukraine, is at a standstill, Merkel said, pointing at the absence of a “stable ceasefire”.

A United Nations mission on the ground, which will be discussed during the talks, “could perhaps play a pacifying role” in the region, she said.

Earlier, Germany’s foreign minister Heiko Maas said he was “relatively optimistic about the chances of a United Nations mission”, telling the Die Welt newspaper: “We want to give a new dynamic to the Minsk process.”

Russia is accused by Kiev and Westerners of militarily supporting the separatists in eastern Ukraine, which it denies.

Economic cooperation, particularly over energy, was also billed as a central theme in the discussions.

Russia and Germany are partners in the Nord Stream 2 gas pipeline, a project criticised by US President Donald Trump due to Berlin’s reliance on Moscow.

Ukraine worries that the Nord Stream 2 Baltic Sea pipeline from Russia to Germany will transport gas now flowing through its territory and deprive it of crucial transit fees.

After spat with US, Turkey’s Erdogan and Germany’s Merkel ‘discussed to improve ties’

Russia has shut off gas supplies to Ukraine in the past, having knock-on effects in the European Union.

“Ukraine must, in my opinion, play a role in the transit of gas to Europe”, even after the start of Nord Stream 2 in 2019, the German Chancellor said.

Putin once again defended the project “which addresses the growing demand of the European economy for energy resources”.

“I want to stress here that Nord Stream 2 is only an economic project and it does not close the door to the continuation of gas transit through the territory of Ukraine,” he said.

In July, Putin assured that Russia was willing to keep Russian flowing through Ukraine after the pipeline was commissioned, but without going into details on volumes or tariffs.