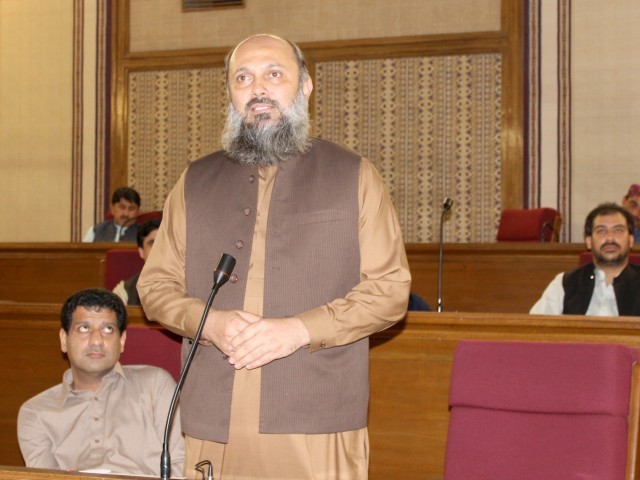 Zehri was fielded by the combined opposition, comprising the Balochistan National Parfty-Mengal and the Muttahida Majlis-e-Amal.

Kamal is the third among his family members who got elected to the post: his father Jam Muhammad Yousaf and grandfather Jam Ghulam Qadir had also remained chief ministers of Balochistan.

The session to elect the new leader of the house began at 11am. It was chaired by Balochistan Assembly Speaker Abdul Quddus Bizenjo.

Former chief minister and Pakistan Muslim League-Nawaz leader Sanaullah Zehri was sworn in after he made his first appearance in the assembly on Saturday.

Ballots were issued by the assembly’s secretariat office.

The new CM was hugged by almost all assembly members, especially those belonging to the coalition of six political parties.

“As the leader of the house, I am responsible to work with all coalition parties as well as members of the opposition to resolve issues confronting Balochistan,” Kamal told the house after being elected.

Kamal said many politicians in the assembly had misgivings about the federal government.

“Many of us have served as federal ministers, had working relations with various prime ministers and presidents, but were unable to raise issues afflicting the province.”

He said that such suffocating politics had compelled them to abandon the previous system altogether.

Congratulating Kamal on his election as the new CM, PTI parliamentary leader Yar Muhammad Rind said, “We can’t blame other provinces for looting Balochistan’s resources because for the past 50 years, this assembly was being run by Baloch leaders.

“Unfortunately, our assembly failed in adopting an effective legislation to secure the rights of the people of Balochistan.”

Stressing the need to protect Balochistan’s resources, Rind said, “BAP must remain true to its manifesto.”

Rind pledged unconditional support for BAP’s government, but also vowed to hold Kamal and his government accountable if they failed to deliver on their promises.

According to sources, the new chief minister will take the oath of his office at the Governor House on Sunday (today).