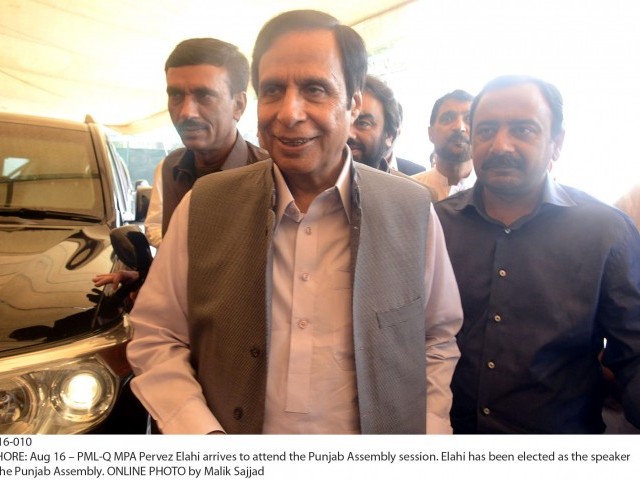 LAHORE: Election to the Punjab Assembly speaker proved to be a shocker for the Pakistan Muslim League-Nawaz (PML-N), as the PTI-backed Pervaiz Elahi won by bagging 201 votes, a figure that shows betrayal of at least 15 PML-N members during secret balloting.

On Thursday, the PML-N, which had ruled the province for the last ten years, took an aggressive posture and managed to delay the election to the coveted post by around one hour.

However, the PML-N candidate for the slot of leader of the house, Hamza Shehbaz, did not seem to be leading from the front.

Prior to the voting for the position for which the PML-N had fielded Chaudhry Muhammad Iqbal, PML-N’s Khawaja Saad Rafique raised objection to the voting method and asked if there was a mechanism to ascertain that a member did not take his cell phone inside the polling booth for taking picture of the ballot.

Punjab Assembly’s outgoing speaker Rana Muhammad Iqbal Khan said every voter could give his phone to the election staff or his colleague before voting. However, Rafique demanded to remove the screen but around the ballot box.

With the consensus of members from the treasury benches, the speaker later announced that the vote of an MPA, who was found taking his mobile phone inside the polling booth, would not be cancelled.

At this the house broke into a pandemonium as the PML-N legislators started chanting slogans: “Waziray Ala Kon hay? Khalaai Makhlooq batye Gi [who will be the prime minister, the establishment will tell”.

At this point the house broke into a pandemonium as the PML-N legislators started chanting slogans: “Waziray Ala Kon Hay? Khalaai Makhlooq Batye Gi [who will be the prime minister, the establishment will tell”.

When polling started, the PML-N made a hullaballoo over alleged showing of ballot by a PTI lawmaker Shamsa Ali and managed to get her vote cancelled. They also foiled a similar attempt by PTI legislators who had claimed that a PML-N MPA, Ishrat Ashraf, had also showed her ballot paper to Hamza.

Elahi bagged 201 votes while the PML-N’s Muhammad Iqbal received only 147 votes. A total of 349 votes were cast but one vote was rejected.

When the outgoing speaker announced result of the polls, a pandemonium broke out in the house with a number of the PML-N legislators encircling the speaker’s podium chanting slogans against Pervez Elahi.

And when Khan administered oath to Pervez Elahi and the latter made a speech, no one could hear anything because of the noise created by the PML-N lawmakers. Finally Elahi gave 10-minute deadline to the legislators to go back to their seats for election of deputy speaker but to no avail.

Later, the new speaker adjourned the proceedings for 30 minutes for offering Mughrib prayers. But the opposition decided not to return to the house. Later, the speaker sent a three-member committee to listen to the opposition issue outside the House.

When the house proceedings were resumed, the PTI’s Mehmoodur Rasheed informed the speaker that they met with opposition legislators who expressed reservation over ‘stealing’ of their mandate and horse-trading during speaker’s election and claimed that 15 of their MPAs voted for Elahi.

Meanwhile opposition legislators entered the House upon which treasury benches thumped the desks to welcome them. Saad Rafique said they came back on assurance of Rasheed that their mandate will not be stolen and they will give respect to their mandate.

He said they did not want to start politics of containers but if their mandate is stolen forcefully, they will be on roads and will do just what the PTI did in 2014.

The PTI’s candidate for the slot of deputy speaker, Sardar Dost Muhammad Mazari, received 187 votes while the PML-N candidate Muhammad Waris Shaad grabbed 159 votes. Out of the 348 votes cast, two were declared rejected.

No applause for former speaker

Not even a single PML-N legislator of the PML-N opposition welcomed the former speaker when he returned to the house as a lawmaker after taking Elahi’s oath. He silently entered the house and stood for a while before a lawmaker made a place for him on a seat.