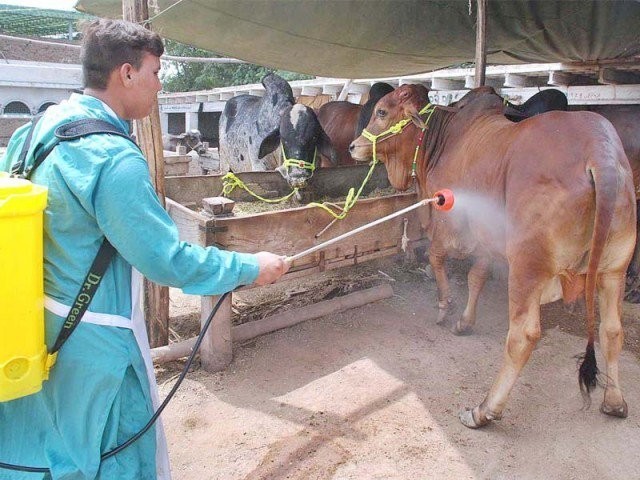 ISLAMABAD: As people start purchasing sacrificial animals ahead of next week’s Eidul Azha to observe religious rituals, the chances of contracting various diseases from animals have increased. As a result, the health authorities have issued a warning for the public about the potential of the Congo Fever spreading.

The public and the healthcare authorities — for both humans and animals — has been advised to take precautionary measures to avoid any fatal infections.

The Field Epidemiology & Disease Surveillance Division (FEDSD) at the National Institute of Health (NIH) on Wednesday issued an advisory regarding prevention and control of the Crimean-Congo Hemorrhagic Fever (CCHF) ahead of Eidul Azha. It noted that prevention was their best bet since no vaccine is currently available for the disease and the only way to reduce infections is by raising awareness. The advisory notes that areas, where domestication of animals is very high, can be affected by this disease.

Last year, Pakistan saw as many as 51 positive cases of the Congo fever.

Since the beginning of this year, a total of 59 suspected cases of the virus have been submitted for testing at the NIH, of which eight were found to be positive for CCHF, the institute said.

The NIH warned that healthcare workers along with animal herders, veterinarians, para-veterinary staff, livestock workers, animal merchants, butchers and slaughterhouse workers are most at risk from the disease.

Apart from them, close contact with animal caregivers and those involved in burial practices are also at risk of being infected.

The advisory explained that CCHF is a disease caused by a tick-borne virus (Nairovirus) of the Bunyaviridae family with a case fatality rate of 10–40 per cent. Ticks, especially of the Hyalommagenus, are both reservoir and vector for the CCHF virus.  Numerous wild and domestic animals, such as cattle, buffaloes, goats, and sheep are silent carriers of this virus and the adult ticks feed on these animals.

The health institute advised those at risk to wear protective clothing (including long-sleeved shirts and long trousers), wear light-colored clothing during a visit to the animal market so that ticks can be easily detected on the clothes and regularly examine clothing and skin for ticks; if found, remove them safely; and use approved repellents on clothing and skin.

It warned of crushing the ticks and suggests to wear gloves and other protective clothing while handling animals or their tissues, notably during slaughtering, butchering and culling procedures in slaughterhouses or at home.

The NIH further advised adopting safe burial practices if anyone infected with the virus passes away.

Following the recent spell of rains, the NIH has also issued an advisory regarding the increased number of typhoid fever cases.

It said that a new form of typhoid fever has emerged, one which is extensively drug-resistant (XDR Typhoid) and it is being reported from different areas of the country, especially from some areas of Sindh, including Hyderabad and Karachi.

But it is not clear whether cases in the capital are drug-resistant because no tests were conducted to diagnose it further.

As tests are being conducted in Sindh, none of the cases in the capital has been diagnosed, said Mumtaz Ali Khan, an epidemiologist at NIH.

The typhoid fever usually spreads during the summer and monsoon season. The NIH said that typhoid is caused by a bacteria (SalmonellaTyphi) which occurs through the faecal-oral route and spreads through contaminated food, milk, frozen fruits and water or through close contact with an already infected person.

Contamination is mainly caused by poor sanitation and mixing of sewerage in drinking water.