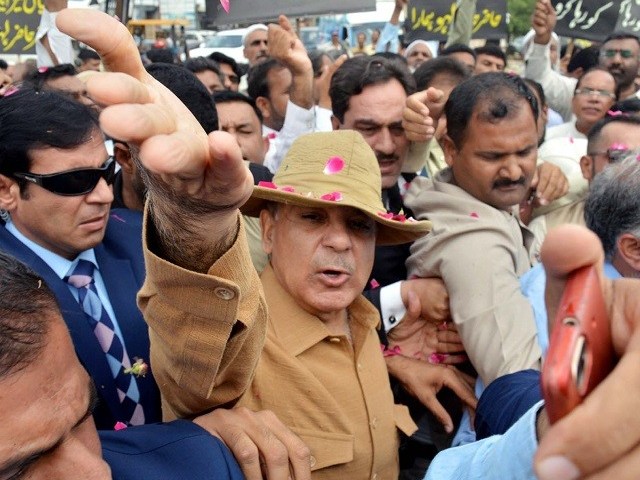 Shehbaz Sharif during a PML-N protest in Islamabad on Wednesday. PHOTO: PPI

ISLAMABAD: Two major political parties of the opposition, Pakistan Peoples Party and Pakistan Muslim League-Nawaz, seem drifting away with each crack appearing in their fragile ties after PPP asked the latter on Wednesday to review its decision to nominate Shehbaz Sharif for the slot of the leader of the house.

Speaking to reporters, PPP chairman Bilwal Bhutto Zardari, on being inquired, stated that he would ask the PML-N to change its nominee for the election of prime minister.

The National Assembly is scheduled to elect its Leader of the House on Friday. Pakistan Tehreek-e-Insaf (PTI) chief Imran Khan is set to face Shehbaz, who would be contesting the election on behalf of the opposition.

The rift between the two major opposition parties was also obvious on the occasion of the election to the speaker and deputy speaker of the house on Wednesday. Right after the election of PTI’s Asad Qaisar as speaker, the legislators belonging to PML-N started chanting slogans against the ruling party-in-waiting, but without the support of PPP lawmakers.

“However, names did not come under consideration then … keeping in view the agreed strategy of the opposition parties, PML-N supported the candidate of PPP for the post of speaker and we never objected over the name of Khursheed Shah for this purpose,” he stated.

Senator Khan said if PPP had any reservations over Shehbaz Sharif being the candidate for the slot of Leader of the House then it should have expressed it during the APC, which it did not.

People would soon be able to differentiate between parties that are showing maturity to keep the opposition parties united and the ones attempting to breach the alliance.

“It takes two hands to clap,” he commented and added that his party would still try to keep the alliance intact.

Meanwhile, PPP leader Nafisa Shah admitted that the party was yet to develop consensus internally over providing support to PML-N over Shehbaz Sharif’s candidature. “Joint parliamentary meeting of our party could not take place as yet and there are still two days left to deliberate over the matter,” she stated.

According to Shah, the top leadership of the party has been elected to the National Assembly and it will devise its own strategy on different parliamentary issues during the next five years, which may contradict with PML-N’s stance.

She said the similar thing happened during the sitting of the House on Wednesday when PML-N protested and PPP did not. “PML-N protested over the issue of Nawaz Sharif as it was its strategy and not that of PPP,” she added.