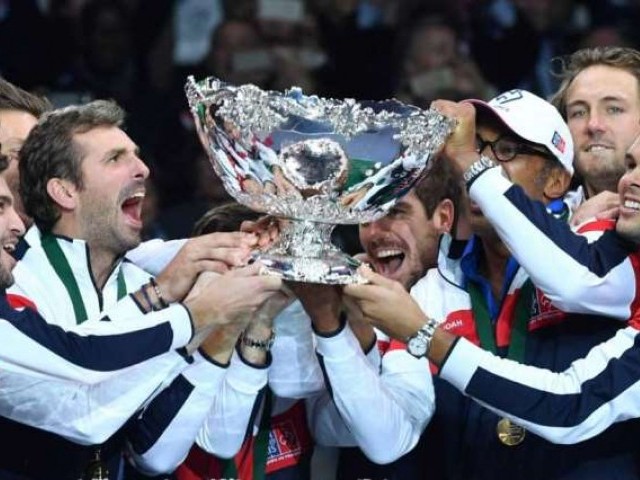 LOS ANGELES: The most radical overhaul in the 118-year history of the Davis Cup could be given the green light on Thursday as the tennis world gathers in Florida to vote on sweeping reforms which have divided the sport.

Around 120 delegates at the International Tennis Federation’s annual meeting in Orlando will decide whether proposals by federation chief David Haggerty are to be given the go-ahead.

Haggerty’s plan will see the Davis Cup’s sprawling existing format, stretched across the calendar year and played in all corners of the globe, condensed into a season-ending 18-nation event played at a single, neutral venue.

Haggerty told AFP in a conference call on Tuesday that the overhaul would boost the ITF’s ability to spread development funding across the globe, pumping around $25 million back into the sport.

“The ITF is the only organisation that puts money into the development of the game,” Haggerty said. “And that’s what this project enables us to do. The money that we make will be put back to the nations for their development programs and the future of tennis.”

The reforms have the backing of a $3 billion partnership from the Kosmos investment group, founded by Barcelona football star Gerard Pique and supported by Japanese billionaire Hiroshi Mikitani.

The ITF maintains the new-look Davis Cup would boost the profile of the tournament, which was first held in 1900 when the United States defeated Britain at the Longwood Cricket Club in Boston, Massachusetts.

Under the new proposed format, 18 teams would play in the Davis Cup finale, split into six groups of three teams. Six group winners and two runners-up would then advance to knockout rounds.

Unlike current Davis Cup ties, which comprise four singles and one doubles, ties would feature only two singles and a doubles game.

Federation chiefs say the revamped competition would effectively create a fifth Grand Slam event, increase prize money and allow the Davis Cup to attract top players by freeing up space on the calendar.

Yet the changes have appalled some of the greatest names ever to grace the competition.

Past Australian Davis Cup captains and players including Rod Laver, John Newcombe and Lleyton Hewitt were united in condemning the proposed overhaul.

Newcombe, a five-time champion as a player, described the overhaul as “a recipe for the death of the Davis Cup as we know it.”

“The Davis Cup is 118 years old and was the forerunner that made tennis into an international sport,” Newcombe said.

Hewitt disparaged the changes as little more than a “money grab” which ignored the tournament’s history.

Haggerty however said Tuesday that while “change is difficult sometimes,” he had been encouraged by positive feedback from delegates in Florida this week.

“The mood is good. The reception has been very positive,” he said. “We just want to do the right thing for tennis…The new model allows the ITF to fulfil the mission in a much better way.

“Having more resources to put behind the development of tennis is the most important thing for an international federation.”

The 13-time Grand Slam winner believes a change in format is long overdue.

“I think that format needs to be changed. And I’m all in favour of that,” Djokovic said in Toronto last week. “You play one year, and then the next year you don’t play. It’s just the scheduling of this kind of format so far has been pretty bad.”

If successful, the new format would be launched in November of 2019, with Europe guaranteed to host the first two editions of the new-look event.

One complication however could well be the introduction of a revamped World Team Cup due to take place in Australia in the first week of 2020.

The tournament, which has the backing of the ATP and Tennis Australia, will feature 24 teams and offer prize money and rankings points.