Serb sets his eyes on upcomi­ng US Open as he takes to favour­ed hard courts
By AFP
Published: July 16, 2018
Tweet Email 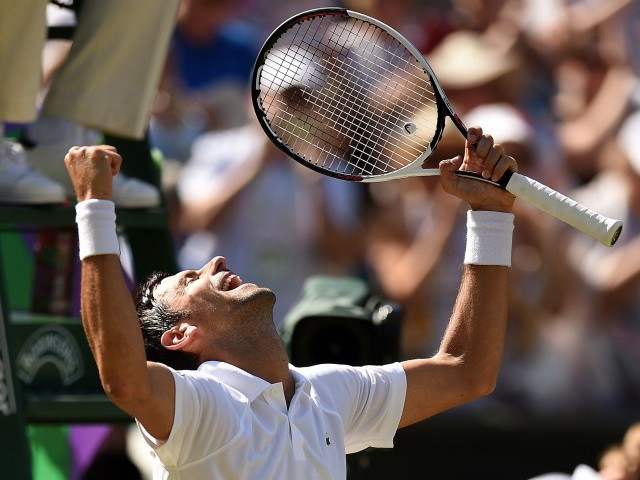 Djokovic admitted he is feeling good about his tennis once again after struggling for confidence in the recent past. PHOTO: AFP

LONDON: With his Grand Slam reputation and place back in the world top 10 restored, Novak Djokovic will now target a third career Wimbledon-US Open double after clinching his fourth title at the All England Club.

Djokovic defied the odds and even stunned himself by cruising to a 13th major title on Sunday to go fourth on the all-time list of Slam winners.

Now the 31-year-old heads for the North America hard court season where he has traditionally thrived.

Of his 69 career titles, 51 have been on hard courts with 17 of those in the United States.

When he won his first Wimbledon in 2011, he was to add his maiden US Open, repeating the grass court/hard court double four years later.

His desire to repeat that feat burns even deeper after he missed last year’s New York showpiece with the elbow injury which threatened to torpedo his career after his 2017 Wimbledon bid ended prematurely at the quarter-final stage.

“Well, I understand that people are questioning whether I can consistently play at this level. Trust me, I am, too,” said Djokovic. “If you asked me a month and a half ago whether I think I can win Wimbledon, part of me yes, I hope, but maybe I wasn’t that sure at that time of my level of tennis.”

However, the Serb admitted the grass title has lifted his spirits. “But this is going to be a huge confidence boost and springboard for whatever is coming up. I like to play on hard courts,” he said. “The US Open was always a successful tournament for me. I didn’t played it last year. I’m looking forward to go out there and play my best.”

Djokovic’s title triumph on Sunday, against a weary Anderson who had spent 21 hours on court becoming the first South African man in the final in 97 years, was his first at the majors since Roland Garros in 2016 when he completed the career Grand Slam.

He arrived at Wimbledon in a prolonged slump after undergoing elbow surgery and with his ranking at 21, his lowest for 12 years.

But with two-time champion Andy Murray missing, eight-time winner Federer defeated by Anderson in the quarter-finals and Djokovic beating world number one Nadal, the 2008 and 2010 champion in a 5-hour 15-minute semi-final, the stage was set for the Serb.

He will head to the United States boosted by his rejuvenation and knowing that he has a winning record against all his leading rivals.

Despite his joy at winning his first Slam for two years, Djokovic admitted that there were times when he thought he would never return to the top.

“Yeah, yeah, absolutely. There were several moments where I was frustrated and questioning whether I can get back on the desired level or not,” he said. “But that makes this whole journey even more special for me.”