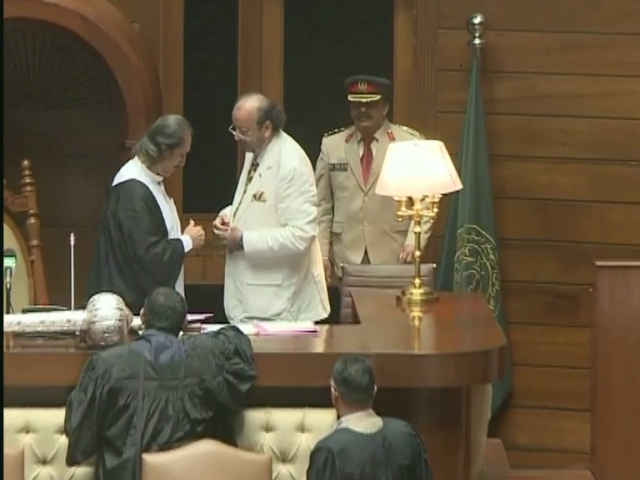 Polling for the election of the speaker and deputy speaker of Sindh Assembly commenced on Wednesday as Durrani and Muttahida Qaumi Movement-Pakistan’s  (MQM-P) Javed Hanif contested for the post.

PTI’s Imran Ismail was noticeably absent from the session after his call for removing the boundaries of Bilawal house created friction with the PPP. The GDA’s Arif Mustafa Jatoi was also absent.Three members of Tahreek-e-Labbaik Pakistan (TLP) including Younus soomro, Sarwat Fatima and Mohd Qasim were present in the house, but did not cast their votes.

The elections are being held through a secret ballot. Nadir Magsi, a PPP MPA, has been appointed presiding officer and is conducting the election. Nasir Shah is PPP’s election agent and Khurrum Sher Zaman is the opposition’s agent.

The PPP has already nominated former chief minister Murad Ali Shah as leader of the house for the second consecutive term. On the other hand, opposition parties have reached a consensus over the name of GDA’s Sheharyar Mahar.

There are a total of 168 seats in the assembly. Around 130 MPAs have been elected to the provincial assembly on general seats, while the remaining reserved seats for women and minorities have been divided among political parties according to their numbers on general seats.

According to the notified results, the PPP won 75 general seats, in addition to 17 women seats and five minority seats, bringing its total strengthin the assembly to 97. The Pakistan Tehreek-e-Insaf has 23 general, five women and two minority seats, making a total of 30.

The Tehreek-e-Labbaik Pakistan will have three MPAs in the Sindh Assembly with two on general seats and one female member, while a single MPA elected on general seats will represent the Muttahida Majlis-e-Amal.

Speaking to The Express Tribune, Sindh Assembly secretary GM Farooq said that only lawmakers and journalists would be allowed to attend today’s session in view of security concerns.

“We have cancelled the passes of visitors given the security threat,” he said, adding that after the deputy speaker’s election, the session will be adjourned with the announcement to collect nomination forms for the election of leader of the house (chief minister).  “We will issue the nomination forms to political parties today [Wednesday] and the election will be held on Thursday,” he said.

Saudi state carrier hit by system failure ahead of hajj