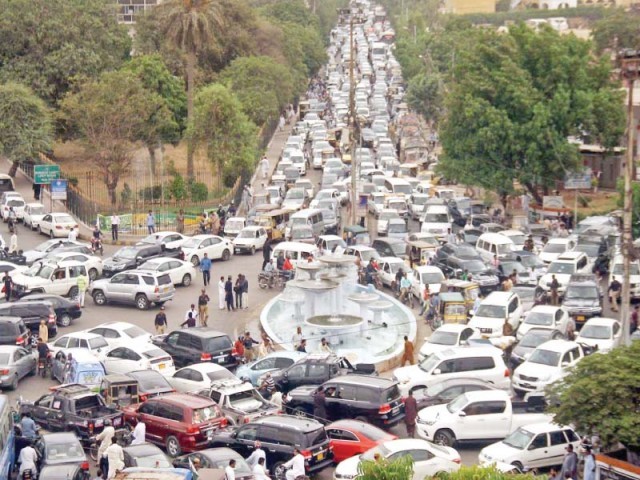 Traffic was blocked Monday morning at Fawara Chowrangi and its surroundings due to the inaugural session of the Sindh Assembly. PHOTO: ONLINE

KARACHI: The newly-elected members of the Sindh Assembly took oath on Monday in the maiden session of the 15th provincial assembly. Acting Governor Agha Siraj Durrani administered oaths to 160 members of the House that comprises 168 MPAs. Five members couldn’t make it to the proceedings while three seats are currently vacant due to the death of a candidate before the polls and the withholding of notifications of two MPAs following rigging allegations.

The session chaired by Durrani echoed with slogans shouted by supporters of various political parties, who were witnessing the proceedings from the packed visitors’ galleries.

The session commenced at 11:10, when Durrani asked the members of their choice of language in which they would take the oath. The majority of the legislators opted for Sindhi, followed by Urdu. Only three members chose to take the oath in English.

Durrani, who has also won the provincial assembly seat from Shikarpur, first administered the oath himself.  After the oath-taking ceremony, members came to the podium to sign the attendance roll. An interesting scene was witnessed when former chief minister Qaim Ali Shah was called for his signature and the PPP supporters in the galleries started clapping and shouting slogans of “Jiye saeen jee, jiye Shah jee.”  The speaker asked people to remain silent, while Qaim Ali Shah waved to the supporters.

The session saw several lawmakers don colourful and traditional outfits. Some wore the patko [turban] and ajrak [traditional Sindhi chador], while others sported the Sindhi topi [cap] – a traditional ornament popular in Sindh. In terms of attire though, the PPP’s Tanzeela Qambrani stole the show with her traditional African dress complete with the head scarf, large earrings and an ajrak draped across her body. Qambrani is the first Sheedi woman – of African descent – to be sworn into the legislature.

The 168 seats in the assembly comprise 130 general seats, with the remaining reserved for women and minorities, which are given to political parties on proportional basis.

According to the notified results, the PPP won 75 general seats, in addition to 17 women seats and five minority seats, bringing its total strength to 97 in the assembly. The Pakistan Tehreek-e-Insaf has 23 general, five women and two minority seats, making a total of 30.

The Tehreek-i-Labbaik Pakistan will have three MPAs in the Sindh Assembly with two on general seats and one female member, while a single MPA elected on general seats will represent the Muttahida Majlis-e-Amal.

In with the new

The assembly’s makeup is starkly different from its predecessor in terms of the composition of its members. Many of the lawmakers belonging to the PTI, PPP and even the MQM were new inductees.

PTI’s nominee for Sindh governor, Imran Ismail, who secured the provincial assembly seat from Clifton area, was among those who took oath.

The election of speaker and deputy speaker will be held on Wednesday morning, followed by the election of the chief minister on July 16.

The PPP has already nominated Agha Siraj Durrani for the speaker’s slot and Rehana Leghari for the post of deputy speaker.  Meanwhile, the name of Murad Ali Shah has been decided by the party for the chief minister’s post for the second consecutive term.

On the other hand, opposition parties including GDA, PTI and MQM, have decided to field joint candidates for speaker, deputy speaker and chief minister. In this connection, a meeting of opposition parties was held in the Sindh Assembly building.

The meeting decided to field a GDA candidate for the slot of CM.

The opposition candidate for speaker will be nominated by the MQM and deputy speaker from PTI, which being the second largest party in the House can get the slot of the leader of the opposition in the House too.

Various names from the opposition were in circulation on the media for the slot of speaker, deputy speaker and leader of the opposition. According to officials, PPP has simple majority in the house and can win all the slots and opposition parties’ efforts to contest the elections is merely a parliamentary requirement.