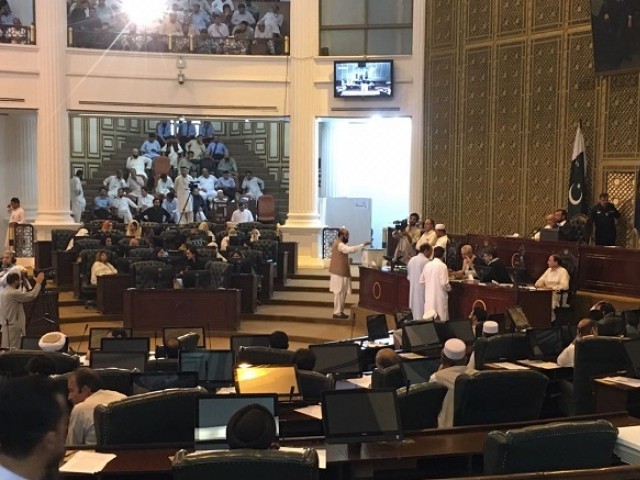 PESHAWAR: Maintaining their hold over the provincial government, the Pakistan Tehreek-e-Insaf clinched the speaker and deputy speaker slots in the provincial legislature on Wednesday.

PTI’s Mushtaq Ghani was elected and sworn in as the speaker of the K-P Assembly. Ghani received 81 votes while his opponent Laiq Mohammad Khan received 27 votes out of a total 108 votes polled.

Mehmood Jan received 78 votes while his opponent Jamshaid Khan Mohmand bagged 30 votes. A total of 109 votes were polled for deputy speaker out of which one was rejected.

The House will elect the chief minister on Thursday through a division of house system. Proceedings will begin at 11am. PTI has nominated Mahmood Khan for the position and MMA’s Mian Nisar Gul will contest from the joint opposition.

PPP’s Nighat Orakzai could not poll her vote for speaker as she arrived late and the presiding officer Sardar Aurangzeb Nalota announced the end of the polling and began the counting process.

Orakzai protested in front of the speaker’s desk for not waiting for her. An independent candidate from PK-25 Didar Khan also did not reach the house to poll his vote. Members of the assembly chanted “vote ko izzat do” (give the vote respect) in protest.

The process of electing the speaker and deputy speaker of the Khyber-Pakhtunkhwa Assembly commenced on Wednesday as lawmakers voted for their candidate.

After the election of the speaker and his oath-taking ceremony, the newly appointed speaker will chair the voting process for the slot of deputy speaker.

For the deputy speaker, PTI has nominated Mehmood Jan and the joint opposition has nominated Jamshaid Khan Mohmand of Pakistan Muslim League-Nawaz (PML-N).

Polling was being conducted using the secret ballot system and a polling booth has been set up in the house. Each member approached the booth and stamped their ballot paper. 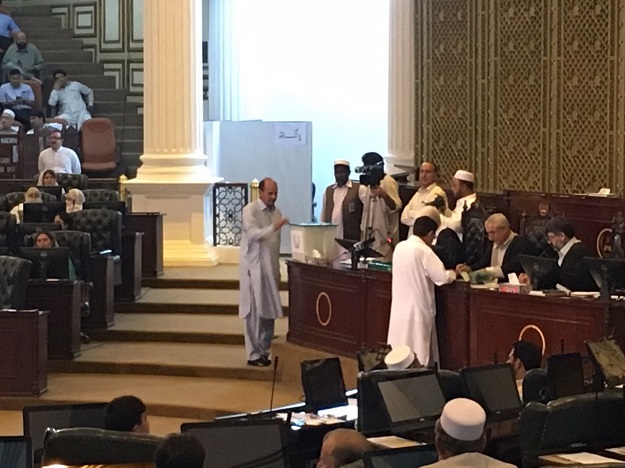 The sitting began about 50 minutes after the scheduled time and Sardar Aurangzeb Nalota, nominated governor for K-P, is presiding over the session.

Earlier, the presiding officer administered the oath to those elected members who were absent on Monday.

During the session, media protested against the influx of outsiders to the press galleries of the house which posed a problem for journalists. Many visitors were allowed in the house despite assembly administration announcing that entry passes for visitors had been cancelled. The media boycotted the session and walked out of the house to register their protest.

In the 124-member Khyber-Pakhtunkhwa Assembly, the PTI is leading with 84 seats. The MMA has 13 seats, the ANP nine, the PML-N six, the PPP five and the PML-Q one seat. Election was postponed at two constituencies – PK-78 Peshawar and PK-99 DI Khan.

Election results are withheld in one constituency – PK-23 Shangla – where the number of women voters was less than 10 per cent of the total votes. The PTI had won 64 general seats while two independent candidates joined it later. It has been allocated 16 women’s and two non-Muslim seats.

The MMA won 10 general seats. It has been allocated two women’s and one non-Muslim seats.