Liton Das was declar­ed man of the match for his bliste­ring knock of 61 runs off 32 balls
By AFP
Published: August 6, 2018
Tweet Email 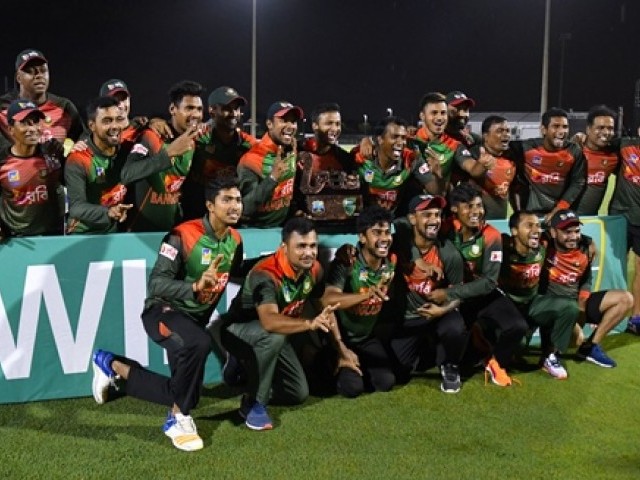 LAUDERHILL: Bangladesh withstood a withering assault from Andre Russell to complete a series-clinching 19-run victory on the DLS Method over the West Indies in the rain-affected deciding final fixture of their three-match T20 International Series on Sunday.

Russell smashed 47 off just 21 deliveries with six towering sixes and one four to keep the Caribbean side in with a chance of surpassing Bangladesh’s formidable total of 184 for five at Central Broward Stadium.

However his dismissal at the start of the 18th over, giving left-arm seamer Mustafizur Rahman his third wicket of the innings, effectively sealed the result in favour of Bangladesh.

Russell’s departure at 135 for seven off 17.1 overs was immediately followed by a sharp shower which ended any further prospect of play although there was little chance of the West Indies getting anywhere close to the target off a full 20 overs with all their big-hitters gone.

Having been thrashed in both Tests at the start of the tour, this T20 series triumph follows on the 2-1 success in the One-Day International contest for the Asian side.

Their formidable total was set up by a career-best effort from Liton Das.

Das set the tone at the top of the order for his team after captain Shakib al Hasan chose to bat first with a blistering innings of 61 off just 32 balls with six fours and three sixes.

He earned the “Man of the Match” award and stole the show from his more experienced and prolific opening partner, Tamim Iqbal, in an opening stand of 61 off just 4.4 overs.

Along the way the pair registered the fastest-ever fifty by Bangladesh in T20 International cricket off only 21 deliveries as they tore into the spin of Samuel Badree and Ashley Nurse before also putting the pace of Russell to the sword.

It took the introduction of captain Carlos Brathwaite to engineer the breakthrough when he had Tamim caught at short fine-leg for 21 while Keemo Paul removed Soumya Sarkar cheaply for the second consecutive match to pull the West Indies back into contention.

Brathwaite also accounted for Mushfiqur Rahim while Kesrick Williams ended the rampaging knock of Liton as the Bangladesh innings stuttered when it seemed a total in excess of 200 was assured.

However an unbeaten 32 from Mahmudullah and an unbroken 38-run sixth-wicket stand with Ariful Haque ensured that Bangladesh got up to a competitive total.

West Indies replaced out-of-form opener Evin Lewis with the hard-hitting Chadwick Walton at the top of the order in their only change for this match but it failed to have the desired effect.

Walton and opening partner Andre Fletcher fell cheaply, as did the experienced Marlon Samuels, who was bowled by a shooter from Shakib.

“This was a tremendous team effort and will give us a lot of confidence moving forward,” said a delighted Shakib, who was named “Man of the Series. “Now we need to build on this performance, in both the ODIs and T20Is, when we return home to be more consistent and competitive against the big teams.”

Wicketkeeper-batsman Denesh Ramdin put on 45 runs for the fourth wicket with all-rounder Rovman Powell but it was the arrival of Russell at the fall of Ramdin’s wicket which revived a flagging West Indies.

He threatened to win the match off his own bat even with wickets continuing to fall around him but a miscued straight hit off a Mustafizur full-toss resulted in the catch at long-off by Ariful and the subsequent Bangladeshi celebrations.

“I didn’t think it was our smartest batting effort,” said Brathwaite in assessing his team’s performance in the run-chase. “Our bowlers pulled it back very well when it looked as if they would have gotten to 220 but we just couldn’t execute with the bat as a team when it mattered.”