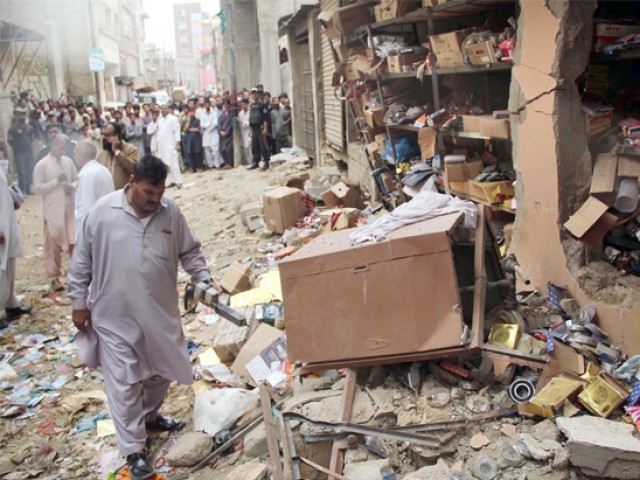 The explosion also caused damage to the building and the vehicles parked inside. PHOTO: ONLINE

KARACHI: At least two people were killed and four others injured after a cylinder exploded inside a warehouse in Sher Shah on Saturday. Following the explosion, volunteers from different welfare organisations reached the site and shifted the victims to the Civil hospital for medico-legal formalities and treatment.

According to the doctors, two persons died at the spot due to critical injuries while the injured were admitted to the hospital. The two deceased persons were later identified as 20-year-old Muhammad Ashraf and 25-year-old Subhan.

An extra contingent of law enforcers including police and Rangers also reached the site of explosion and inquired about the incident. The experts from bomb disposal squad were also called in. They ruled out the possibility of a terror or criminal act and declared it an accident. Police officials said that gas pipeline passing from the building caught fire and was also damaged.

Inspector General of Police (IGP) Amjad Javed Saleemi took notice of the explosion and sought a comprehensive report from Zone West police chief on the explosion. According to SHO Mukhtiar Ahmed, a gas pipeline also burst due to the gas cylinder explosion. The explosion also caused damage to the building and the vehicles parked inside. Police officials said that the explosion took place in a warehouse that stored spare parts of motorcycles. The officials said that the warehouse was located at the ground floor of the building while the victims used to live on the upper floor. Police officials while citing initial investigations said that it was an accident, but added that further investigation was underway.