Blend of novices, veterans to fly on first private US spaceships

Blend of novices, veterans to fly on first private US spaceships 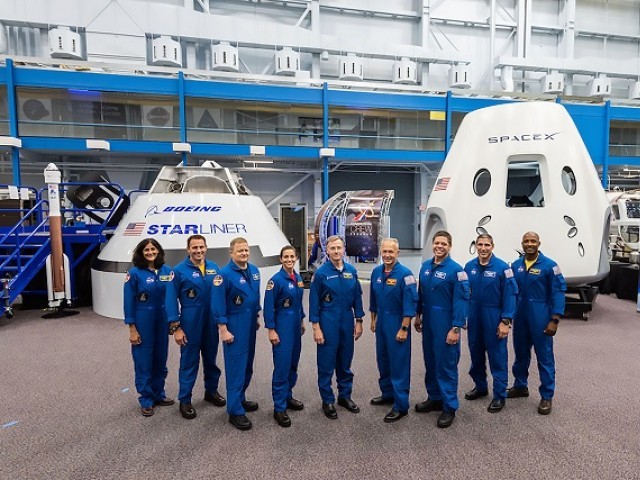 This handout photograph obtained August 3, 2018 courtesy of NASA shows the first US astronauts who will fly on American-made, commercial spacecraft . PHOTO: AFP

TAMPA: NASA on Friday announced the first nine astronauts who will fly to space on Boeing and SpaceX vehicles in 2019, a mix of novices and space shuttle veterans.

These pioneering flights to the International Space Station aboard commercially built crew capsules will restore the American ability to send people into orbit for the first time since the US space shuttle program retired in 2011.

For the past seven years NASA astronauts have hitched rides to the orbiting outpost on Russia’s Soyuz spacecraft, at a cost of some $80 million a seat.

“This is a big deal for our country and we want America to know that we are back, that we are flying American astronauts on American rockets from American soil,” said NASA administrator Jim Bridenstine at a ceremony to announce the crew members in Houston, Texas.

An uncrewed Orbital flight test is scheduled for later this year, with the first crew on board in mid 2019, NASA said.

For SpaceX, a demonstration flight with no passengers is set for November 2018, and the first manned flight set for April 2019.

Those named for the crew test flights for Starliner include NASA shuttle veterans Eric Boe and Christopher Ferguson, along with Nicole Aunapu Mann, a naval aviator who was named a NASA astronaut in 2013 and will be making her first flight to space.

“It is going to be a proud moment for America,” she said.

After that, the companies move on to actual missions. NASA “has contracted six missions, with as many as four astronauts per mission, for each company,” the agency said.

On board Starliner’s first mission will be NASA veteran Sunita Williams, a retired Navy captain and experienced space shuttle astronaut, and Josh Cassada, a Navy pilot making his first flight to space.

More astronauts will be announced to join the crews at a later date, NASA said.

Pompeo calls for pressure to be maintained on North Korea