Hafiz Ahmad says it appear­s as if a specif­ic party is above the law
By Our Correspondent
Published: August 3, 2018
Tweet Email 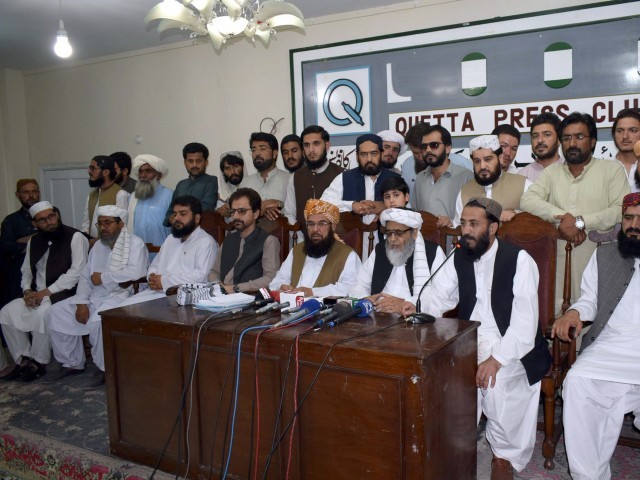 MMA leaders Hafiz Hussain Ahmed and Maulana Ghafoor Haideri were cry foul the other day during a press conference in Quetta. PHOTO: EXPRESS

QUETTA: Member of Jamiat Ulema-e-Islam-Fazl (JUI-F) Hafiz Hussain Ahmad has said that the latest grand sale of independent candidates for both national and provincial assemblies has brought disrespect to the sacred institution (parliament).
“The record rigging in general elections and the grand sale of independent candidates have maligned the image of the country internationally,” said Hafiz Ahmad while addressing various delegations, which called on him on Thursday.

BNP-M, JUI-F agree on seat adjustments in other parts of Balochistan

Ahmad said, “It appears as if a specific party is above the law of the land.”
The JUI-F member criticised the current alleged phase of buying and selling of independent candidates.
He said, “In ancient times, slaves were purchased. In modern days, rates of independents are being fixed.”
He said through force and money the results of the general elections were manipulated, adding that through the worst kind of manipulation, efforts were made to defeat the democratic friendly people.

He said the democratic people “no matter if they stay in parliament or out of it” would play their role for revival of democracy.
He said the process of buying and selling of sacrificial animals for Eidul Azha is at its climax in the markets of the country, similarly, markets have been established inside the country for buying candidates of national and provincial assemblies.