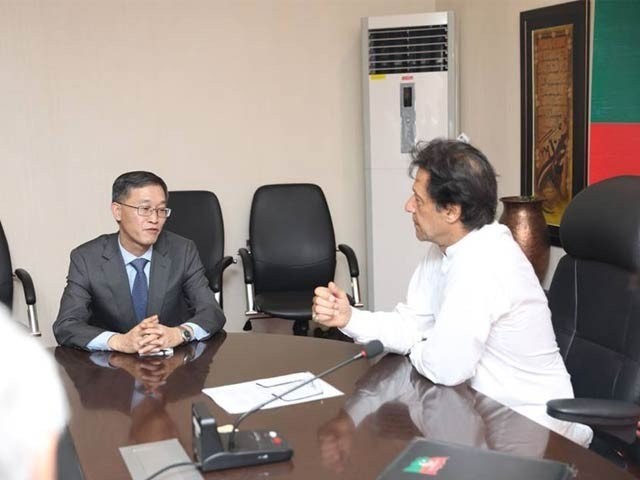 Jing said that by conducting the election the continuity of democracy has been ensured in Pakistan. PHOTO COURTESY: PTI OFFICIAL

“Beijing wants to work together with the government-in-waiting,” said Jing who called on Pakistan Tehreek-e-Insaf (PTI) chairman at his residence in Bani Gala on Monday.

The Chinese envoy to Pakistan also felicitated the PTI top leader on his July 25 election victory and conveyed the his government’s well-wishes.

He went on to say that by conducting the election the continuity of democracy has been ensured in Pakistan.

Jing lauded the recent victory speech given by the former cricket star in which he said: “We [Pakistan] want to learn from China how to lift people out of poverty.”

“The Pak-China relationship serves as an example for the world,” Imran said, adding, “We’ll [Pakistan] work to improve relations with China and hopefully through our joint efforts can improve the regional situation as well.”

Since the election results which saw the Imran-led PTI win, world leaders have been reaching out to the him to felicitate him on the victory and looking to work together with the prime minister-in-dwaiting.