A young man is seen shouti­ng that they are shooti­ng the dog owing to PTI’s riggin­g in electi­ons
By Our Correspondent
Published: July 29, 2018
Tweet Email 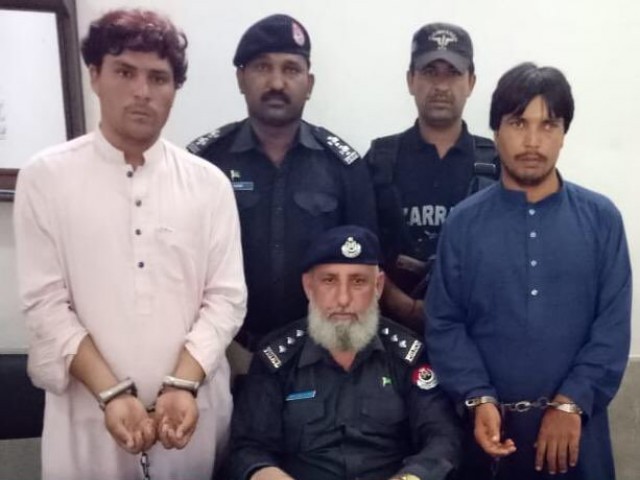 PESHAWAR: Bannu police have arrested culprits involved in the killing of a dog draped in a Pakistan Tehreek-e-Insaf flag.

The K-P police stated, in a tweet, that the individuals involved in the brutal act were arrested earlier on Saturday responding within 12 hours of the report.

In a video that went viral on social media, Quami Watan Party workers were seen wrapping a dog in a PTI flag and tying it to a tree trunk.

A young man with pistol in the video is then seen shouting that they are shooting the dog owing to PTI’s rigging in the recently held elections. Three gunshots are then heard in the video.

Responding within 12 hours, #Bannu Police worked throughout the night to arrest 2 culprits at 6:45am involved in torturing, killing the animal and making video of it. #KPPolice thanks Social Media users for raising the issue. pic.twitter.com/0SDSYEgAu9

According to the police, the brutal act was committed by QWP workers and supporters from the former members of the provincial assembly member Adnan Wazir on PK-89; a day after results was announced.

After much uproar from the public and local leaders, local journalists informed The Express Tribune that the arrested culprits were from the Jani Khel area of former FR region Bannu. The culprits have been identified as Hazrat Umar, son of Gul Sher, and Naseerullah, son of Qadar Jan. They are both residents of Zindi Ali Khel, PS Jani Khel, Bannu.

#Bannu :: Confessional video of the culprit involved in torturing, killing the animal and making video of the shameful crime. #KPPolice once again Thanks the Social Media users for raising the issue. pic.twitter.com/SDz4nLMQjR

Police have also uploaded a confessional video by one of the culprits, Hazrat Umar. In the video, police questions the culprit about his motivations behind the act. He confessed to shooting the animal at 9am and informed the police that he was urged by another accomplice to commit the act.