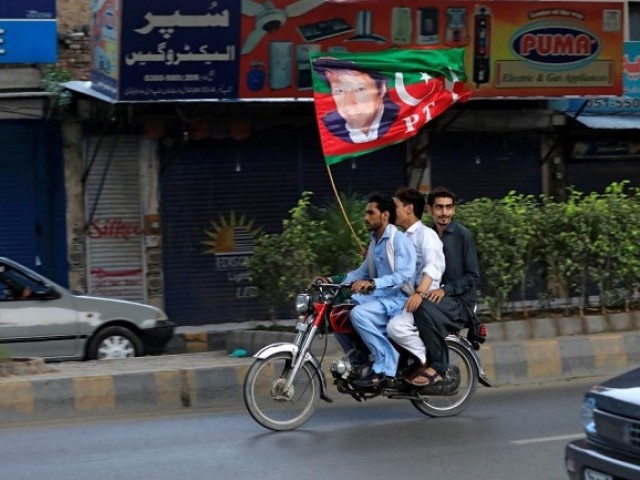 PESHAWAR: As the unofficial results continue to trickle in, the PTI seems to be in pole position to not only get a simple majority but a two-thirds majority.

By Thursday evening, unofficial results released by the Election Commission of Pakistan (ECP) showed that the Pakistan Tehreek-e-Insaaf (PTI) was in a clear lead in Khyber-Pakhtunkhwa (K-P) having secured 57 seats in the 99 (general)-seat assembly with results on 14 seats awaited.

Elections in two provincial constituencies of K-P including PK-78 and PK-99 are postponed due to the death of candidates in those constituencies including ANP’s Haroon Bilour and PTI’s Ikramullah Gandapur.

The K-P assembly has a total 124 seats including 99 general seats, 22 seats reserved for women and three for Non-Muslims.

As per the results trend, the PTI is expected to secure around 70 seats in the provincial assembly. Couple with its 16 reserved seats, it could get quite close to a two-thirds majority (86 seats) in the house — which will be a first in the history of the K-P assembly.

The PTI has also considerably improved its situation from the 55 general seats it had managed in the province in the 2013 elections and it made an alliance with the Jamaat-e-Islami (JI) and Qaumi Watan Party (QWP). This time, however, it would not need to look for support from parties.

Even if it absorbs the four independents who have won in the province so far, it would further secure its position in the house.

The results also show that the K-P assembly will have a weak opposition as compared to past assemblies and the PTI would be at liberty to make legislation.

PTI is followed by the Muttahida Majlis-e-Amal (MMA), an alliance between two major religious parties including the Jamaat-e-Islami and the Jamiat Ulema-e-Islam Fazl (JUI-F). The MMA managed to bag seven seats in the province (almost the same as the JI managed in the 2013 elections).

Other seats secured by the MMA include PK-81 Kohat-II where Shah Dad Khan won with 17,498 votes. PTI’s Imtiaz Shahid was second with 16,323 votes. Having survived two assassination attempts during the campaign process, Akram Khan Durrani of the MMA secured PK-90 Bannu-IV with 32,801 votes. He narrowly beat out competition from PTI’s Haji Malik Adnan who secured 32,628 votes.

The adjoining seat of PK-94 Tank was also secured by MMA with its candidate Ahmad Khan bagging 27,651 votes. His closest rival was ANP’s Ghulam Qadir Khan who managed 15,482 votes.

Others who took seats in the province was the ANP who secured five seats including PK-16 Lower Dir-IV where Bahadar Khan took 18,712 votes to beat MMA’s Izazul Mulk who got 16,001 votes. Other seats they took was PK-22 Buner-III where party stalwart Sardar Hussain Babak managed to secure 22,385 votes and beat MMA’s Raj Wali Khan who got 17,079 votes. In PK-35 Torghar, ANP’s Laiq Khan bagged 11,636 votes to secure the seat against MMA’s Shaukat Ali Khan who got 7,998 votes.

No more ‘safe seats’ in K-P

The Pakistan Muslim League-Nawaz (PML-N) also secured four seats in the provincial legislature including PK-30 Mansehra-I, PK-32 Mansehra-III, PK-34 Mansehra-V and PK-55-Mardan VIII. Its provincial president Ameer Muqam, though, could not secure a victory on any of the two provincial assembly seats he was contesting in Swat.

One of the most surprising results was that of the Tehreek-e-Labbaik Pakistan (TLP) who managed to not only secure a provincial assembly seat but did so against PTI’s former chief minister. Syed Haider Shah of TLP bagged 16,914 votes in PK-64 Nowshera-IV to beat PTI’s Pervez Khattak, who only secured 15,196 votes.

As results trickled in, voters and supporters of PTI spent their day celebrating their victory in the provincial capital.

The residences and houses of the PTI candidates were thronged by supporter and vehicles bearing PTI flags were plying with party songs blaring through loudspeakers.

Some supporters even put up music systems on their motorbikes to play celebratory party songs. There were also reports about protests from Bannu and in Upper Dir over delays by the returning officer in releasing official results.

In Upper Dir, Jamaat-e-Islami and MMA candidate Sahibzada Tariqullah and party workers staged a sit-in outside the office of the returning officer to protest against the delays.