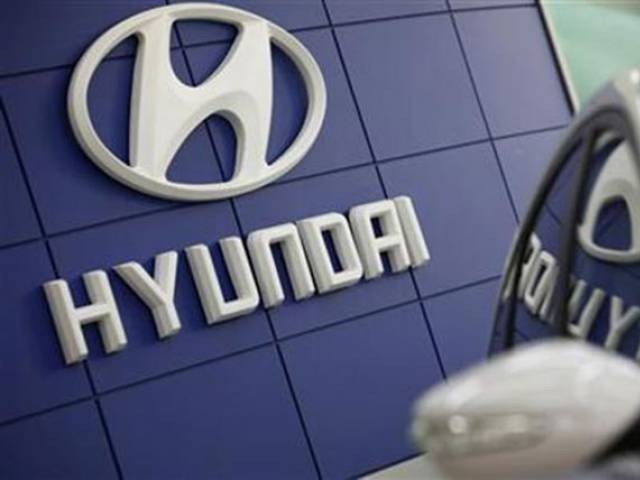 On the consumer side, experts believe competition drives down prices. However, with a near 22% plunge in the rupee and dependence on imports, it is long before Pakistan’s auto sector can see lower prices. PHOTO:REUTERS

FAISALABAD: Pakistan is set to see locally-assembled Hyundai cars roll out in March 2020, said an official privy to the development, as South Asia’s second largest economy braces for greater variety of vehicles on its expanding roads.

Hyundai, which is setting up a plant in Faisalabad spread across 66 acres, is partnering with local conglomerate Nishat Group to venture into Pakistan’s increasing but Japanese-dominated auto sector.

The South Korean carmaker has shared its operational plan with the Faisalabad Industrial Estate Development and Management Company (FIEDMC), the body overseeing the special economic zone on which the plant is located, and is expected to roll out locally-assembled vehicles by the end of the first quarter of 2020.

“The company plans to produce 7,000 units in its first year,” Aamir Saleemi, COO at FIEDMC, told The Express Tribune.

After having long been dominated by Japanese brands, Pakistan has seen a number of vehicle makers express interest in setting up assembly/manufacturing plants. French carmaker Renault and South Korea’s Kia are two others currently in the same boat.

The trigger came after the PML-N government approved a five-year auto policy that offered various incentives to new players eager to take advantage of a 207-million population and increasing economic growth that hit a 13-year high in 2017-18.

“The Japanese-dominated industry is set to see a transformation. Hyundai cars will roll out in March 2020,” said Saleem, thrilled at the advent of industrialisation in Pakistan. 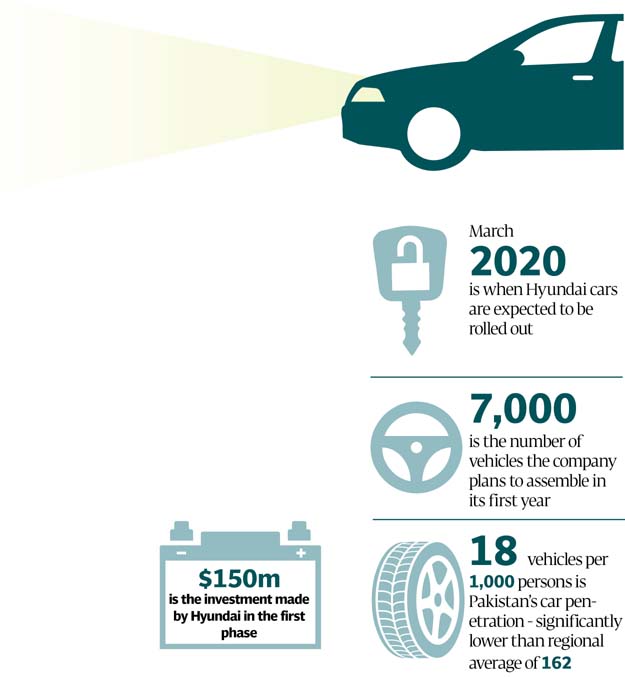 The work to set up showrooms across Pakistan has already started, Saleemi said, adding that teams have been surveying various locations.

The company will aim to expand its production capacity to 22,000 within three years, he added.

Nishat Group, one of the biggest conglomerates in Pakistan, has ventured in to the auto sector after proving its mettle in the banking, textile and cement space with names like MCB Bank and DG Khan Cement. Its textile company, Nishat Mills, announced a three-month profit of Rs1.1 billion in January-March.

The group entered into a joint venture agreement with Hyundai Motor Company and is setting up the plant in the greenfield investment category.

Saleemi said the company will bring new technology that would focus on fuel-efficient cars, aiming to break the stronghold of the Japanese brands.

“This will create healthy competition, provide jobs and bring much-needed investment in other relevant sectors.

“The incentives and concessions offered under the auto policy have created a favourable environment.” Hyundai has already invested $150 million, and this comes as a welcome sign for Pakistan that struggles to attract foreign direct investment (FDI). The amount stood at a paltry $2.76 billion in FY18, less than 1% of GDP.

Hyundai operated in Pakistan during the Musharraf era. However, stiff competition and an open-import policy along with financial problems faced by its local partners forced it to exit the market.

A shrinking auto sector and energy shortage subsequently also caused the closure of many other industries in Pakistan, putting the country on a path of economic crisis that forced authorities to turn to the International Monetary Fund (IMF) several times.

Saleemi said thousands have lost their jobs, but there is hope so as long as Pakistan continues to attract new players.

“This kind of industrialisation in Faisalabad will change the map of the city. It will require many hotels, restaurants, clubs to be built to facilitate customers and international buyers.

“The revival has come on the back of good policies that promote investment.”

On the consumer side, experts believe competition drives down prices. However, with a near 22% plunge in the rupee and dependence on imports, it is long before Pakistan’s auto sector can see lower prices.

But what greater capacity would do is reduce the waiting time for car delivery, getting rid of the menace of ‘premiums’ in the dealership market.

Pakistan’s car penetration of 18 vehicles per 1,000 persons is significantly lower than the regional average of 162, signifying strong potential for automobile growth due to growing disposable income and healthy growth in the country.

Govts come and go, but power-sector challenges still there