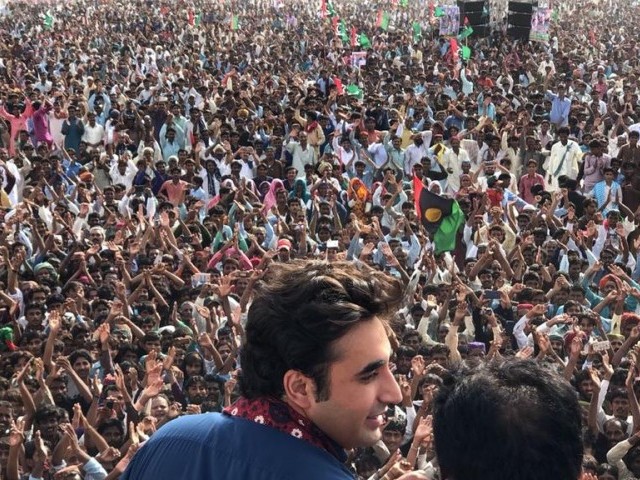 ISLAMABAD: Defying threats to their personal safety, leaders of various political parties are continuing their electoral campaigns ahead of the general election.

Bilawal Bhutto-Zardari is the latest recipient of a warning about existing threats.

According to documents obtained by this correspondent, Nacta had warned on June 9 that Jamaat-ul-Ahrar planned to target PTI chief Imran Khan, PML-N’s Shebaz Sharif and PPP’s Bilawal Bhutto-Zardari during their electioneering campaigns.

Nacta predicted that terrorist activity was likely to occur in Khyber-Pakhtunkhwa (K-P) and Punjab.

The authority had later issued another threat alert on July 13.

It maintained that “trained teenage suicide bombers … are being kept in different cities from where they would be dispatched to conduct attacks against political personages of K-P, tribal districts, and elsewhere.

Nacta has so far issued dozens of threat alerts about terrorist activities ahead of the general election.

On July 5, Nacta stated that TTP was planning to target Imran Khan during his election campaign “anywhere in the country”, but the chances of terrorist activity taking place in K-P “are high”.

Nacta provided a detailed alert on July 11, stating that Jamaatul Ahrar would mount terror attacks using a group of terrorists, comprising between five and six extremists, under the command of a man identified as Hayat alias Suleman, targeting various political leaders “over the next few days”.

“These terrorists have been tasked with targeting political leaders … especially Imran Khan, Shehbaz Sharif and Bilawal Bhutto-Zardari,” it stated.

On the same day, Nacta issued another threat alert, stating that Qari Tayyab Baba of Lashkar-e-Jhangvi (LeJ), an affiliate of TTP, had been moved from Balochistan and tasked with carrying out attacks in Lahore and adjoining areas. “He is already there.”

“Ustad Asim Umar (emir of AQIS) had directed his close confidant, Hanif (a former student of the Jamia Fareedia, Islamabad) to carry out terrorist attacks in Islamabad and Rawalpindi,” the alert stated.

On April 25 this year, Nacta stated that the outlawed Tehreek-e-Taliban Pakistan (TTP) had issued a ‘Fatwa’ against Maulana Fazlur Rehman, allegedly because of his statements during political meetings at Swat, Dir and Buner.

“The maulana has been accused of perpetuating self-interest in the garb of religion. Moreover, TTP … cadre may use the maulana’s personal staff for conveying intimidating messages,” the alerts stated.

On May 3, Nacta warned that India’s RAW and NDS had finalised a plan to target gatherings of the Pashtoon Tahafuz Movement (PTM) soon to instigate an anti-state movement. The next day, a similar threat alert was issued again about the safety of PTM activists.

Nacta warned on June 25 that Sajna Group was planning to target renowned people in the tribal belt, including Latif Afridi, Shahabuddin and Shah Jee Gul Afridi.

The election campaign for the general election has already proven to be the deadliest in the country’s history.

ANP leader Haroon Bilour was the first casualty, victim to a terror attack in Peshawar.

A few days later, a suicide attack at a corner meeting organized by the Balochistan Awami Party (BAP) claimed the lives of 128 people, including Mir Siraj Raisani.