Attack­ers knew the base “inside out” and were well aware of the points where they would have an advant­age.
By Salman Siddiqui
Published: May 26, 2011
Tweet Email 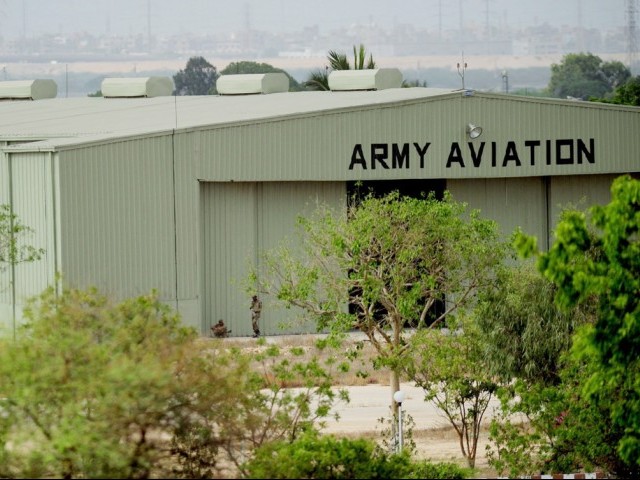 Attackers knew the base “inside out” and were well aware of the points where they would have an advantage. PHOTO : AFP

Officials from Pakistan Navy suspect the May 22 naval airbase attack would not have been possible without inside help.

They, however, deny that the change in command at the PNS Mehran has anything to do with the attack and termed the transfer orders a ‘routine’ matter.

When the attackers cut the barbed wire on the perimeter wall at the end of the Pakistan Air Force’s (PAF) Faisal base which is adjacent to the PNS Mehran, they had two options.

Instead of the naval base, they could have gone after the assets and personnel of the air force, but they chose not to, even though there were at least four American-made C-130 cargo planes on the PAF side.

“The attackers knew that the navy’s prized assets such as the Orion aircraft and the Chinese and American personnel were present on our base and they came specifically after them,” a senior navy officer said, admitting that no one on the outside could have known about it.

He said the attackers knew the base “inside out” and were well aware of the points where they would have “an advantage over the security forces” who would engage them.

He pointed out that three of the Special Service Group commandos, who were sent in to subdue the attackers, saying this was “no easy feat”.

The navy officials suspects the reconnaissance prior to the attack was carried out not only by someone taking visual footage of the base from the nearby Karsaz bridge, but also by someone from inside the sprawling base where, more than 500 personnel are deployed at any given time.

However, they denied that the attackers were provided weapons by some insider and insisted that the terrorists were equipped with their own Russian-made machine guns, grenades and rocket launchers.

“They are definitely some people suspected of involvement from within, but we’re still investigating exactly who was behind it,” he said.

“From a janitor to an officer at the base, everyone is a suspect at this point,” he said.

He said that previously there have been cases when clerics of local mosques at naval premises were found to be involved in ‘anti-state’ activities.

While the Tehreek-e-Taliban Pakistan have claimed responsibility for the attack, navy officials say that they are not ruling out the possibility of a “foreign country’s intelligence agency’s involvement in the incident”.

Rear-Admiral Tehseenullah Khan, who was the former director-general of the Maritime Security Agency, has been appointed as the head of the team probing the case.

Navy officials insist the attackers were “not Pakistanis, but foreigners”.

“When I saw the body, I immediately knew that the young man was (an) Uzbek,” a navy official said. He provided no forensic evidence to support his assertion.

However, doctors who conducted the autopsy on the bodies of the four terrorists contradicted the navy’s asertion and said they looked like “any other young Pakistani men” from northern areas.

Meanwhile, security agencies on Wednesday took a new set of samples for DNA testing from the bodies of the four terrorists being kept at an Edhi morgue.

Base commander Raja Tahir has been replaced by Commodore Khalid Pervez. Although the announcement of the change in command of the PNS Mehran has been made only two days after the attack, Pakistan Navy officials insist it is nothing out of the ordinary.

“There’s no truth that Tahir is being replaced as punishment since his replacement orders had been issued four months age and Commodore Pervez has been on the base for more than a week,” a navy official said.

A navy official says that even though they were being blamed for a massive security lapse, the fact is that the breach occurred on the side of the wall that comes under the air force’s jurisdiction.

“They have their own cameras and watchtowers there and failed to spot the attackers. So why blame us,” the official said. He added that there was no question about heads being rolled for the incident.

Navy officials are extremely upset with Rehman Malik’s statement that some attackers might have escaped the base and say their chief, Admiral Noman Bashir, had no alternative but to agree with the federal minister’s statement.

They also say it was peculiar that Malik came on air at 10:43pm on Sunday, claiming that around 10 to 15 attackers had not only infiltrated the PNS Mehran base, but also taken control.

“The attack began at 10:37pm. How could he claim to know all that when even we at the control room did not know the exact position,” they added. A navy officer admitted it was a mistake on their part for lodging an FIR which said there were more than 10 attackers.