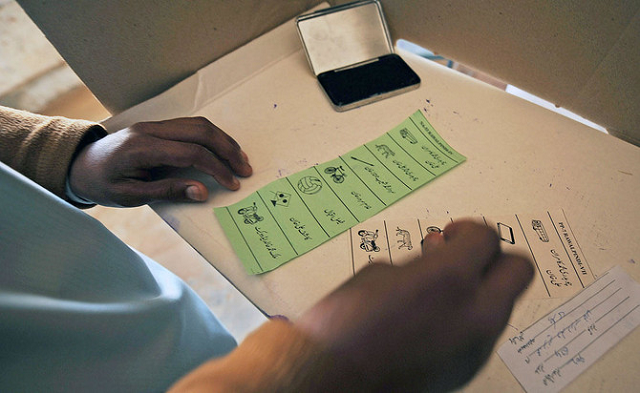 Over 5,000 readers completed an election survey by The Express Tribune. PHOTO: AFP

KARACHI: As the nation braces for a second democratic transition of power, The Express Tribune reached readers to complete a survey on factors determining who they elect.

Some interesting trends were noted with over 5,200 individuals participating in the exercise.

The greatest number of respondents, 58.2%, were based in the Punjab. Sindh followed at 29.06%. Around 11% hailed from Khyber-Paktunkhwa (K-P). Balochistan residents constituted the remainder.

A whopping 94.10% of respondents said they would vote. Many of those not voting were ineligible due to being expats. Other reasons presented included “not satisfied with the performance of any party”, “I am Ahmadi” and “need to rectify fundamental flaws in electoral process. Voting is useless.”

The 11.34% who did not vote in the last general elections said they would not be returning to polling stations this time around either.

Nearly 53% said their vote was influenced by past performance of political party/candidate. 31.14% said they voted for candidates after perusing party manifestos. Party loyalty primarily determined voting behaviour for 12%.‘Other’ factors influencing voting patterns included “commitment to democracy”, political parties that “take a stand for  minorities”, and “character of candidates.”

Respondents in the 18-25 age bracket, surprisingly, prized party loyalty over and above everything else at 49.30%.

76.92% said their families tended to vote for the same party/candidate.