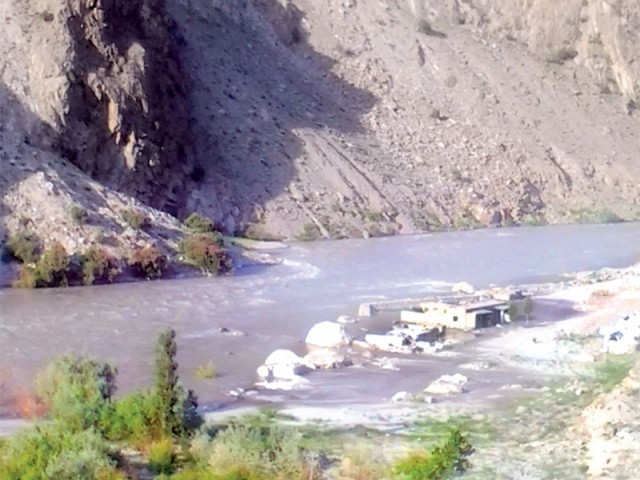 The official apprised that the movement of the glacier is due to the constant rise in temperature coupled with heavy monsoon showers. PHOTO: SHABBIR MIR/ EXPRESS

Flowing through district Ghizer, a ‘lake’ was consequently formed with the flow of water being restricted, an official told The Express Tribune while asking for anonymity. No casualties or injuries had been reported. Five houses, however, have been damaged in the incident.

As per rescue teams the obstruction was later removed and the situation has normalised, the official revealed.

A team of experts including a geologist, an engineer and a regional programme officer have left for G-B to take stock. “We are waiting for them to return” and “once they come we will be in a better position to share details,” an official explained.

“Residents have been evacuated,” he said. The official further said climate change was to be blamed for the incident.

Moreover, people living in nearby areas have been asked to shift.

Such occurrences are routine “mostly in monsoon season” just like landslides, the official maintained. Authorities have been placed on high alert to deal with any untoward situation.

However, according to the initial reports of National Disaster Management Authority (NDMA) available with The Express Tribune, the river is still blocked at Batsuwat area which is around 60km from Gahkuch HQ.

Due to erosion glacier mixed with mud and stones has blocked the main river [Immit River].

So far the water has crossed/spilled over the blockade around 10 times and then it blocked again.

Currently, it has been blocked for the last three hours. About 2km area is inundated by water due to blockade.

The road has been cut off at Bilhanz as around 150-meter road stands washed away with flood with no other route available.

Around 10 small villages consisting of 180 households (600 individuals) are completely cut off due to the blockade, the report says.

In addition to it, at least 31 houses (24 upstream and 7 downstream) are also affected. The families have been shifted to safe locations from these houses with crops also being damaged.

ECP issues notice to Imran over ‘offensive language’ during electioneering