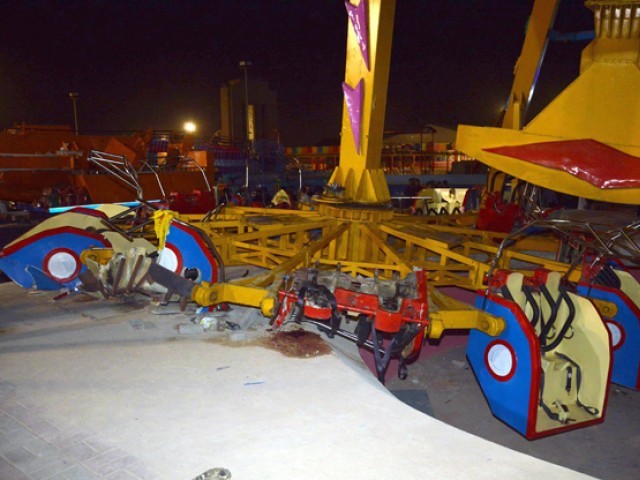 KARACHI: Kashaf, the 14-year-old girl who lost her life in an accident at the newly-inaugurated Askari Amusement Park, was laid to rest at Essa Nagri Graveyard on Monday. Her funeral prayers were attended by a large number of people, including family, friends and well-wishers. Later in the evening, the PIB Police registered an FIR, no.123/2018 against the park’s management for unintentional murder and negligence.

Kashaf, the eldest of six siblings, was among the hundreds of visitors at the park at the time of the incident. Less than a week before the incident on June 12, she had celebrated her 14th birthday.

Wearing a black and yellow dress on Sunday night, the 14-year-old sat on multiple rides – the last one proved fatal. Her family had decided to go to the newly-opened Askari Amusement Park, where all her siblings and grandparents had tagged along as part of Kashaf’s birthday celebrations.

The festivities turned sour when Kashaf decided to try out Discovery, the frisbee pendulum ride that features a circular gondola and rotates as it swings back and forth. The ride was being operated on a trial basis on Sunday. Suddenly, the ride broke apart and crashed to the ground, killing Kashaf on the spot and injuring over two dozen others.

Kashaf’s family watched helplessly as she breathed her last. Her father, who was in China on a business trip at the time of the incident, was informed over the phone. “I had no idea about the incident,” narrated the victim’s father, Abdul Samad. “She was everything for me. Who should I hold responsible?” he questioned.

The hapless father even expressed gratitude that the life of his son had been spared. “My younger son was also insisting to go on the ride with Kashaf but thankfully, he was unable to due to his age,” he explained. Samad returned to the country on hearing the news on Monday, just in time for the funeral.

The family is demanding the authorities to take strict action against those responsible for the accident. “Money is everything for them,” lamented Kashaf’s mother. “They are not compromising on the price of tickets, but they don’t seem to care for the safety standards.”

Meanwhile, the PIB police’s initial investigation report suggested the ride broke apart at its fulcrum. “The swing collapsed after its bolts came apart,” the report states.

Sindh chief secretary Major (retd) Azam Suleman Khan has formed a committee to investigate the incident, with Deputy Commissioner East tasked to compile a report within 24 hours. Meanwhile, parks across the province will remain closed until they have undergone technical inspection.

Karachi Commisioner Saleh Farooqui also took notice of the incident and assured that legal action would also be initiated against the park’s management. The commissioner added that he was also looking into how the park managed to get an NOC to operate.

On the other hand, police officials said that most of the injured were discharged from hospitals after being administered first aid. One person, identified as Kifayat, is admitted at Jinnah Postgraduate Medical Centre in critical condition.

According to park management, they have summoned the Chinese engineers who installed the swing that had been imported from China.