Over a billion people struggle to stay cool as Earth warms

Over a billion people struggle to stay cool as Earth warms 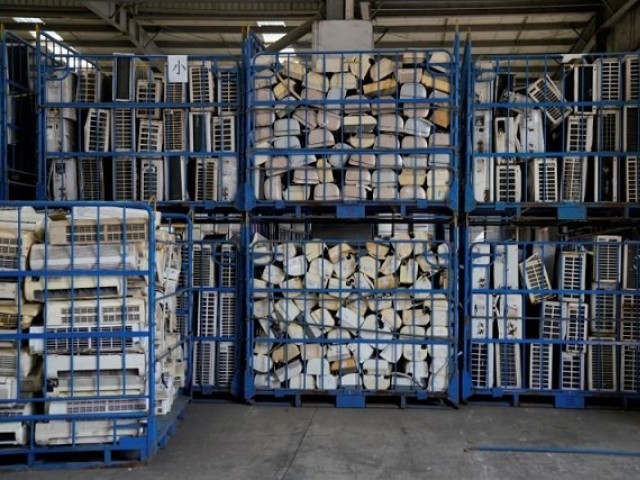 Air conditioners about to be recycled are seen in a warehouse at the government-sponsored recycling park in the township of Guiyu, Guangdong Province, China. PHOTO: REUTERS/ FILE

OSLO: More than a billion people are at risk from a lack of air conditioning and refrigeration to keep them cool and to preserve food and medicines as global warming brings more high temperatures, a study showed on Monday.

More electricity demand for fridges, fans and other appliances will add to man made climate change unless power generators shift from fossil fuels to cleaner energies, according to the report by the non-profit Sustainable Energy for All group.

About 1.1 billion people in Asia, Africa and Latin America 470 million in rural areas and 630 million slum dwellers in cities were at risk among the world’s 7.6 billion people, it said.

“Cooling becomes more and more important” with climate change, Rachel Kyte, head of the group and special representative for the UN Secretary-General for Sustainable Energy for All.

In a survey of 52 countries, those most at risk included India, China, Mozambique, Sudan, Nigeria, Brazil, Pakistan, Indonesia and Bangladesh, it said.

“We have to provide cooling in a super-efficient way,” Kyte said. Companies could find big markets, for instance by developing low-cost, high-efficiency air conditioners to sell to growing middle classes in tropical countries.

And simpler solutions, such as painting roofs white to reflect sunlight or redesigning buildings to allow heat to escape, would also help.

The UN’s health agency says that heat stress linked to climate change is likely to cause 38,000 extra deaths a year worldwide between 2030 and 2050. In a heat-wave in May, more than 60 people died in Karachi, Pakistan, when heat rose above 40 degrees Celsius (104°F).

In remote areas in tropical countries, many people lack electricity and clinics are often unable to store vaccines or medicines that need to be chilled, the study said. And in city slums, electricity supplies are often intermittent.

Many farmers or fishermen, meanwhile, lack access to a “cold chain” to preserve and transport products to markets. Fresh fish goes off within hours if stored at 30 degrees Celsius (86°F) but stays fresh for days when chilled.

Last week, a study by the University of Birmingham in Britain projected that the number of cooling appliances could quadruple by 2050 to 14 billion worldwide, driving a surge in energy consumption.