New row brewing between Italy and Malta over migrant arrivals

New row brewing between Italy and Malta over migrant arrivals 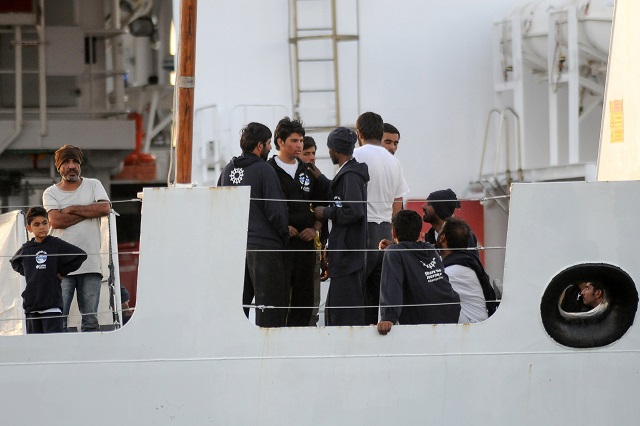 The 67 migrants were earlier held at the port over a row that the group revolted after being rescued PHOTO: AFP

ROME, ITALY: Italy and Malta appeared to be heading for another spat over migrant arrivals after the Italian interior minister on Friday said he would not allow a ship carrying over 400 people to dock.

Matteo Salvini, also deputy prime minister and leader of the nationalist League party, continued the hardline approach to migrants crossing the Mediterranean that has already seen him clash with Malta and other EU nations over a fishing vessel currently taking 450 people towards the Italian island of Lampedusa.

Meanwhile, Valetta said the ship was closer to Italy and those on board wanted to head for its shores.

Dozens of migrants disembark from coastguard ship in Italy

Last month Malta was forced to take the German NGO boat Lifeline carrying over 234 migrants, just days after a standoff between the island nation and Italy led to the French rescue ship Aquarius being diverted and taking 630 people to Spain.

“As promised, I will not give up. Malta, the smugglers and the do-gooders should know this boat will not land here,” Salvini said on Facebook.

According to a statement from Italy’s foreign ministry the boat, carrying “minors in urgent need of assistance”, alerted authorities in Rome in the early hours of Friday while travelling in waters which fall under the jurisdiction of Malta.

The ministry claims that Malta took charge of the operation and asked Italy for “naval help” while not sending any of its own vessels “capable of providing assistance” to the area.

On Tuesday, Italy’s transport and infrastructure minister Danilo Toninelli said on Twitter that maritime laws dictate that Malta should send “its own rescue ships and open its own ports”.

He added that the Italian coastguard would be available to offer support to the island, but that “Malta needs to do its duty”.

However, the Maltese government claimed that it had “satisfied all obligations under the applicable international conventions on coordination of Search and Rescue events”.

He added that the people on board said that they preferred to go to Lampedusa, and that seeing as the ship was on the high seas, Malta “did not have the authority to give it instructions”.

Salvini’s refusal to allow the ship to dock in Italy comes after the decision Thursday to allow 67 people to disembark an Italian coastguard ship that had docked at the Sicilian port of Trapani after a row that caused friction within the country’s anti-establishment coalition government.

The migrants had been held at port as a row brewed over reports that a handful of the group revolted after they were rescued, amid fears that they would be returned to Libya, but were eventually authorised to leave the ship by Prime Minister Giuseppe Conte despite the Salvini’s insistence that they only be allowed off the vessel “in handcuffs”.