Balochistan has immense talent, we want to unearth it: Quetta Gladiators’ owner

Siraj Raisani. PHOTO: @Nooruddinkakar1/ TWITTER
QUETTA: A suicide bomber targeting a political rally of the Balochistan Awami Party (BAP) on Friday killed at least 128 people and injured over 200, the deadliest in a string of attacks on electioneering that have heightened security fears ahead of the elections.

Among those slain was the candidate for PB-35 (Mastung) Siraj Raisani, whose elder brother Nawab Aslam Raisani had served as the Balochistan chief minister from 2008 to 2013.

"My brother Siraj has been martyred," said Haji Lashkari Raisani, another brother who is also contesting for a National Assembly seat from the province.

The blast – which was claimed by the militant group Islamic State  – ripped through the corner meeting in Dringarh village of Mastung district, some 35km away from the provincial capital making it the deadliest in the country since the 2014 carnage at the Army Public School..

"The death toll has risen to 128," Balochistan Home Minister Agha Umer Bangulzai told The Express Tribune, adding that there were more than 100 wounded.

"Siraj succumbed to his wounds while he was being shifted to the Combined Military Hospital (CMH) Quetta," he added.

Provincial Information Minister Malik Khuram Shehzad confirmed the attack was a suicide blast and added that the bomber detonated in the middle of a compound where the political meeting was taking place. 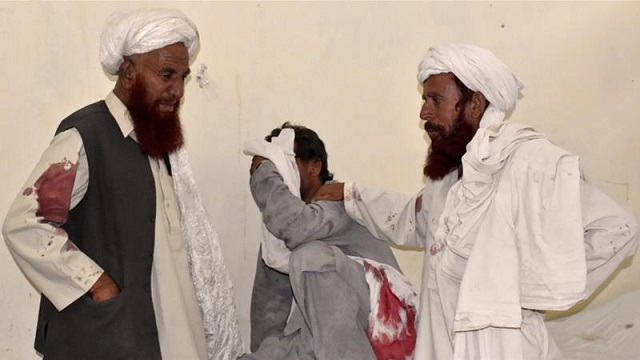 Men mourn the death of relatives and friends at hospital morgue in Quetta. PHOTO: REUTERS

“Siraj was attending the corner meeting in Dringarh, was about to step on to the stage to address party workers when the suicide bomber, disguised as a political worker blew himself up,” Mastung DC Qaim Lashari said.

Emergency workers shuttled victims to nearby vehicles from the bombed-out compound as bystanders sobbed in the darkness owing to the waning electricity in the impoverished area.

Victims in blood-smeared clothes were taken to hospitals in Mastung and Quetta, where they were greeted by tense crowds of mourners. The deceased could be seen covered in shrouds.

According to the bomb disposal squad, up to 15kg of explosive material was used causing a large number of victims as the corner meeting was packed with people.

The army chief expressed his grief over the loss of precious lives in the incident, a tweet of the Director General Inter Services Public Relations (ISPR) Maj Gen Asif Ghafoor said.

Pakistan has lost a highly devoted and adept politician in Siraj Raisani, the tweet said, adding, that attempts of inimical forces to derail important democratic activity would not succeed. "United we all Pakistanis shall Insha’Allah defeat them."

Another condemnable terrorist attack on a political gathering - this time in Mastung. Saddened to learn of Nawabzada Siraj Raisini's shahadat in this targeted attack as well as the shahadat of 15 other innocent citizens.

Pakistan Tehreek-Insaf chairman Imran Khan spoke out condemning the attack on the political gathering as well as expressing sadness over the martyrdom on Siraj Raisani.

While the state is busy censoring news and controlling travel plans of political leaders- #Mastung has been was washed in blood and #Bilour family who lost a brave politician last elections lost one again- all and any words of sympathy feel very hollow. Pls let Pakistan breathe.

Profoundly shocked and deeply saddened about the news of the #MastungBlast #Mastung. Media speak of 80 victims. My thoughts are with the families who lost their beloved ones! What a tragedy! Terror must not prevail. pic.twitter.com/sOTh0jfXo0

While the German ambassador Martin Kobler said that he was profoundly shocked and saddened about the news.

"My thoughts and prayers are with the families who lost their loved ones," he added.

#Mastung Absolutely heart breaking. Ya Allah have mercy, reward the Shaheeds & give patience to their families. We must defeat this wave of terrorism by holding elections on time with a record turn out and make Pakistan go forward insha Allah.

Actor Hamza Ali Abbasi posted on social media that the country must defeat this wave of terrorism by holding elections on time with a record turn out.

Rights activist Jibran Nasir said that if we are honest with our sympathy for the lives lost then we must take action against those who spread the extremist ideology.

If we are honest with our sympathy for precious lives lost in #Mastung then we should take action against those who spread Daesh's ideology of extremism rather than make way for them to enter Parliament. Our hypocrisy is our biggest hindrance towards peace https://t.co/Oty9zri44W

I strongly condemn the attack in Mustung. Saddened to hear about the death of Siraj Raisani & others -my prayers with the family for this tragic loss. Obvious that security for political workers isn’t adequate & the govt isn’t taking strict measures to protect election campaigns

Strongly condemn the terrible attack in Mustung. Sad to hear about the death of Siraj Raisani & others.Prayers with the families for the tragic loss. Have argued in Senate that security for political workers is Zero, and govt is only shuffling paper while our campaigns burn

Another big loss in space of just 3 days! Siraj Raisani martyred along with 15 others in a suicide attack in Baluchistan. May Allah have mercy on departed souls and may He give all bereaved families the strength to bear this huge loss.

Siraj was contesting the election from PB-35 (Mastung) and was believed to be at the heart of provincial politics.

Siraj was contesting the polls against his elder brother, Balochistan former chief minister and Chief of Sarawan, Nawab Aslam Raisani.

In the wake of the incident, the BAP has postponed its political rally scheduled which was to be held on Saturday.