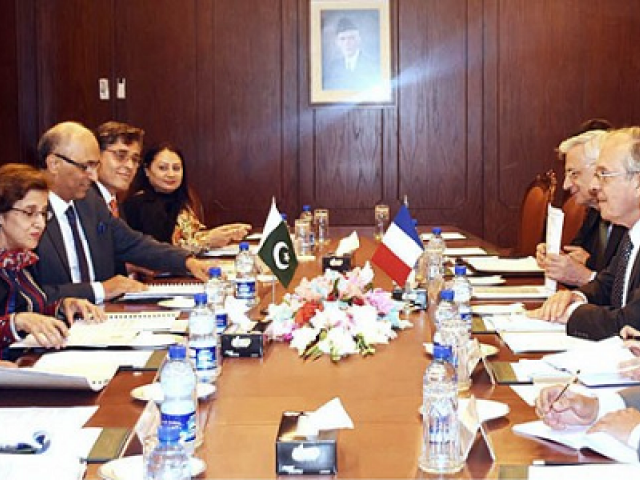 ISLAMABAD: Pakistan and France have agreed to renew their cooperation in the spheres of politics, economics, trade, investment, defence, education and culture, the foreign office said on Wednesday.

The agreement was reached during delegation-level talks under the ambit of the thirteenth Bilateral Political Consultations held at the Ministry of Foreign Affairs. From Pakistan, the talks were led by Foreign Secretary Tehmina Janjua while Ministry Maurice Gourdault-Montagne, the secretary general of the French Foreign Affairs Ministry, who led the French delegation.

The two sides also expressed satisfaction in growing cooperation in the context of the European Union (EU).

Janjua provided an overview of the progress made by Pakistan in strengthening democracy, political stability and improved law and order in the country. The achievements in the fight against terror and implementation of the National Action Plan (NAP) were also highlighted. Janjua briefed the French delegation on Pakistan-India relations and expressed grave concern at the continued human rights violations in the Indian occupied Jammu and Kashmir, which had been verified in a recent report by the United Nations High Commissioner on Human Rights.

The two sides exchanged views on important global and regional issues of mutual interest. The foreign secretary briefed on foreign policy priorities of the country in the region, particularly efforts to facilitate an intra-Afghan process of political reconciliation.

The French appreciated Pakistan’s positive role in peace efforts in Afghanistan and acknowledged the need to work together to address the continuing threat of terrorism and extremism.

Gourdault-Montagne also highlighted the challenges confronting France and the European Union, key amongst them migration.

The two sides agreed to encourage their respective private sectors to take advantage of the investment opportunities on offer in both countries.

How reserved seats for women are reserved for privileged