‘Accountability process has commenced in Sindh’

‘Accountability process has commenced in Sindh’ 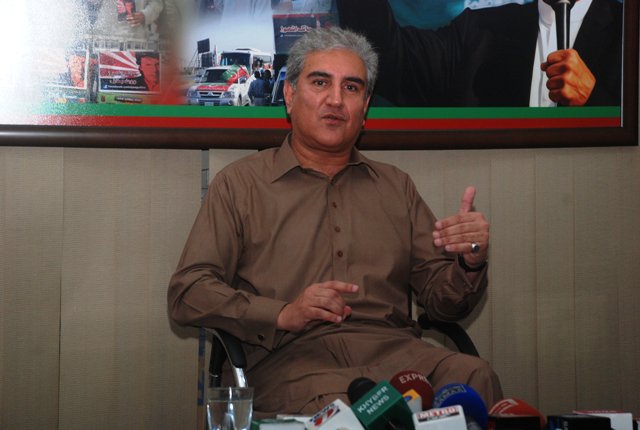 Qureshi has alleged that Hussain Lawai, was involved in money laundering worth Rs25 billion, 29 illegal accounts have been recovered from him. Revealing some facts about Pakistan Peoples Party (PPP), he said in his last days the late leader Makhdoom Amin Fahim was annoyed with party co-chairman Zardari, he alleged.

The reason was an alleged lack of respect, as Fahim and his family were not given the same status as Zulfiqar Ali Bhutto and Benazir Bhutto, he claimed.

He said that the difference between Benazir and Zardari was akin to difference between day and night. The biggest change in Sindh, said Qureshi, is the leader of Sarwari party who has stood for the rights. The province [Sindh] is completely devastated because of corruption, Qureshi lamented.

We aim for a corruption free Pakistan and in this process those who have looted the country will be held accountable one by one, he maintained. Qureshi who is contesting polls from NA-156 and PP-217 thanked members of Majlis-e-Wahdatul-Muslimeen for extending support to PTI in the elections.

Commenting on the Avenfield verdict he said, it has unveiled the differences between Shehbaz Sharif and Nawaz Sharif as two different press conferences were held, that were contradictory to each other.

He said democracy won in Punjab as the bigwigs who have been ruling the province since the end of Zia era were defeated by the rule of law.

The decision has created buzz in the various factions of Muslim League — several party members have defied the rule but many have accepted the verdict, Qureshi explained.

He hoped that the interim law minister would implement the decision of Avenfield reference as it was a corruption case and not a political trial.

The PTI leader further said any ban has not been imposed on Sharif as the party is holding processions. Qureshi indicated that PTI is the only party in which there is no ancestral politics. “Unlike other parties, Imran Khan’s children will not follow in his footsteps as we have a different perception,” he added.

He said the biggest success of Imran Khan is that he has ended politics of settlement.

Moreover, all other parties were imitating the manifestos and the processions of PTI. PML-N will not be able to get the sympathy vote this time, he maintained.