What is up with Mohammad Amir and Imad Wasim?

What is up with Mohammad Amir and Imad Wasim?

During the tour of UK, at one stage, it seemed that left-arm pacer was forced to step in the ground at gunpoi­nt
By Saleem Khaliq
Published: July 5, 2018
Tweet Email 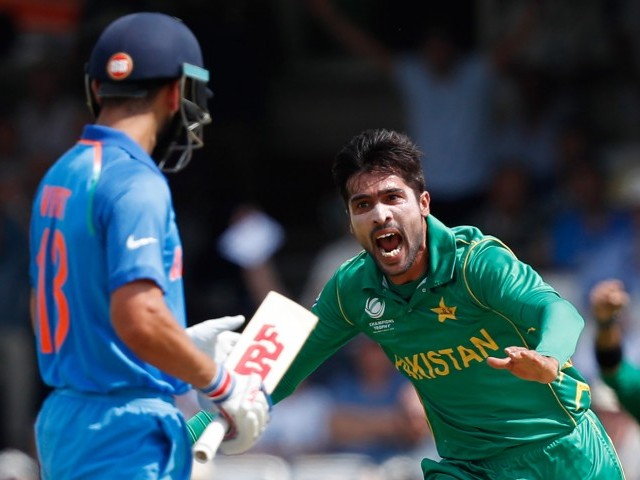 KARACHI: “Give me rest as I am tired of playing cricket constantly, I want to give time to my family.” These words have been uttered by Mohammad Amir repeatedly but still he is being denied rest for a complete series.

However, he is allowed to sit in the dressing room for a match or two.

Amir’s disillusionment with cricket is evident from his game. This was especially apparent in the matches during the tour to UK when it seemed as if he was forced to step in the ground at gunpoint.

When I talked to Pakistan Cricket Board (PCB) Chairman Najam Sethi a few days back, he said that a player cannot decide about resting as this is the authority of the coach, captain and selectors. Sethi further added that head coach Mickey Arthur would take a step regarding Amir as well.

When I asked my informed friends, they told me clearly that the coach is in no mood to give rest to the pacer. Many people are amazed as to why Amir was not part of the team in the first two matches in the ongoing T20I Tri-Series in Zimbabwe.

They question why is he part of the squad and with the travelling party when he is not utilized. I asked a member of the team management as to whether Amir was unfit but the reply came in the negative; Amir is as fit as ever. The reply to my next question whether he had been dropped or given rest was that he is being rested.

It is not our concern as to why Arthur could not get along with the Australian players; as long as he is giving positive results, that implies he is dispensing his responsibilities exceptionally well. He has a crucial role in the success of the team.

Arthur does not like seniors as they are accustomed to taking decisions themselves. Captain Sarfraz Ahmed is not a person to confront anyone, while Shoaib Malik, despite being a senior, has made his place in the hearts of the people with his good attitude.

The time when players were selected for their names is long gone as players with an incorrect attitude are being sent home permanently. An example is Umar Akmal who took the blow for his attitude, while Ahmed Shahzad was also likely to be axed. Even Hafeez is back but maybe he still has a few more days to give before drawing the curtains on his career.

The coach has plans and an objective in his mind: to win the 2019 World Cup.

He has made a team in his mind and wants to keep it in place till next year. Amir is an important member of his plans; however, the pacer has expressed his desire to rest in front of the media saying he is not a machine.

He has also expressed similar thoughts to chief selector Inzamamul Haq more than once for keeping him out of a series due to personal commitments but the coach opposed it.

Arthur does not take it easy when someone tries to dictate things to him. However, everyone is noticing that Amir is not enjoying playing cricket. He is bowling according to his mood while he also played some matches in the UK despite not wanting to do so.

“Amir and Shadab Khan are very important to my plans and I want to keep them in front of my eyes,” Arthur has stated previously.

Arthur feels that if the players are distanced from the team for some time then they will discontinue working hard and start facing issues. This is the reason why Amir has been taken to Zimbabwe but he was rested in the first two matches.

If Amir wishes not to play Test cricket anymore, then he should be heard before the anger boiling inside him comes out to the forefront.

An interesting thing is that Inzamam was in favour of resting the pacer but could not say anything in front of the coach. Perhaps some people may not take a liking to this but the relations between the chief selector and the coach are not exemplary.

Both act according to their egos and are used to enforcing their decisions. Living in their own world, both do not tolerate any sort of interference; however, they have to bear each other.

A close relative of Pakistan pacer Wahab Riaz is a close friend of the chief selector and wants to bring him back to the team but the coach won’t allow this. According to Arthur, Wahab is a ‘lazy’ cricketer and he has doubts about his commitment. That explains why he is being kept out of the team.

Similarly, another cricketer who is out of the good books of Arthur is Imad Wasim who, despite being fit, is still out of the team. There was a time when Imad was one of the favourites of Arthur and he was being considered for captaincy but things seem to have changed now.

The coach feels that he is not working as hard as he did in the past and has not tried to improve his spin blowing. On asking a board official, I was handed the reply that he is not completely fit, but the campaign that kicked off on the social media after being dropped from the Zimbabwe tour indicates that something is wrong.

Imad represented the team for the last time in October 2017. Imad suffered a head injury while captaining Karachi Kings in the PSL 3 this year and during this time, an old issue of Imad related to his knee came to the fore during the T10 league.

He has undergone treatment in England for the problem but it remains to be seen what his future holds. However, he will have to prove to the coach that his focus is more on the on-field issues rather than off-field.

By the way, the real test of the green shirts has just begun. The performance in the T20I against Australia — Paksitan lost by nine wickets — was not only dismal but is also a source of concern.

A series will also be played against Australia, New Zealand and then South Africa in the coming few months. If the results are not good, then a blame-game may start. However, if victories are obtained then both the coach and the chief selector will be happy to take the credit.

Whatever happens should be for the good of the team as no player or the coach or the chief selector is above it.