What's all the fuss about jeep?

What's all the fuss about jeep? 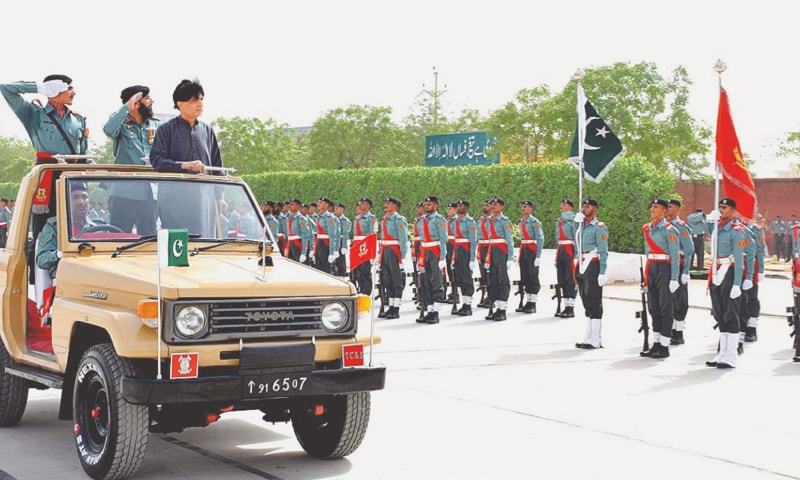 KARACHI: It’s election season. And ‘jeep’ is the buzzword in political and social circles these days. Jeep? Yes, jeep. It’s the election symbol allotted to Chaudhry Nisar Ali Khan, a disgruntled leader of the Sharif-led Pakistan Muslim League. Nisar is contesting the upcoming elections as an independent candidate.

Chaudhry Nisar, who had served as interior minister in the Sharif cabinet, virtually ended his decades-long association with the PML-N after Sharif went on warpath with the state institutions – the establishment and the judiciary to be precise.

Traditionally, Nisar has always served as a bridge between the establishment and the PML-N. But after his disqualification as prime minister, Sharif refused to mend fences and instead declared “war on khalaee makhlooq” (aliens) – an oblique reference to the powers that be.

No ‘Jeep group’ in the making: Nisar

And this is where Nisar decided to say goodbye to Sharif. He announced that he would contest the election as an independent candidate. Subsequently, the Election Commission allotted him jeep as his election symbol.

After Nisar’s departure, the PML-N saw more defections as candidates, mainly those from impoverished parts of South Punjab, returned party tickets to run as independents. Surprisingly, most of them were also allotted jeep as election symbols, though some of them opted for it. They include five politicians from the influential Gorchani family of Rajanpur district.

This provided grist to the rumour mill.

Sharif and his daughter Maryam Nawaz believe these are “forced defections” and that somebody else is pulling the strings. “Everyone knows the symbolism of jeep,” Sharif said while speaking to the media in London, where he is attending to his ailing wife.

Maryam said those who vote for jeeps would be voting for “invisible forces”. She alleged that the PML-N candidates were being coerced into returning party tickets. “They are not jumping ship, rather they are being forced to switch loyalties,” she added. “Jeep is increasingly becoming the symbol of the invisible forces pulling the strings from behind the scene.”

But who are the “invisible forces” and “aliens”?

Sharif didn’t keep the media guessing for long. He gave up on euphemisms when a candidate of his party, Rana Iqbal Siraj, openly alleged that he was being forced to return his party ticket, though he later retracted his statement. “Our candidate was being called to the ISI office in Multan for the past few days. When he refused to give up, they slapped him in the face and humiliated him,” Sharif alleged.

Meanwhile, Chaudhry Nisar has disassociated himself from other independent candidates in Punjab who are also contesting the polls with jeep as their symbols. While speaking to the media in Taxila on Wednesday, he sought to quash the impression that ‘jeep’ had been imposed on him, or that he had asked the other defectors to apply for the same symbol.

A close aide of Nisar said it was wrong to read too much into the election symbol of Nisar. “Our election symbol is being scandalised, I don’t understand why,” Sheikh Aslam told The Express Tribune. He went on to explain that the jeep symbol was the only one available which couldn’t be confused with another symbol.

“A candidate in our constituency has opted for the spoon symbol because it resembles the bat (the election symbol of Imran Khan’s PTI),” he laughed. “We had three options: jeep, pistol, or hammer. We chose jeep,” Aslam added.

Senior journalist and political analyst Mazhar Abbas said it is unusual for multiple independent candidates to contest the election with the same symbol. “It could be a coincidence, but interestingly, almost all these independent candidates are from the PML-N, which leads us to question if there is another PML-N in the making in which the ‘N’ would stand for Nisar,” he asked. “External pressure does exist, there is no denying that. And this is abundantly clear from the formation of Junoobi Punjab Sooba Mahaz.”

Abbas pointed to another interesting point. “Earlier, PML-N defectors were joining the PTI, but the party did not receive a dent because its vote-bank remained intact. However, the new trend is quitting the party and contesting as independent candidates. This shows a change of strategy,” he said.

PML-N’s Yousuf Khan and Dr Hafeez of the Dareshak clan have also returned their tickets and were both allotted the jeep symbol. The two brothers told The Express Tribune that they decided to part ways with Sharif because he was maligning “sacred national institutions”; and intelligence and law enforcement agencies.

“We cannot face voters in our constituency because of Sharif’s statements. We had conveyed this message to the PML-N leadership to stop defaming national institutions,” they said.

Akram was of the view that differences within the party created space for new factions. “If you could recall the earlier PML-N split, Chaudhry Shujaat, Sheikh Rasheed and others had quit the party to make their own faction. Now Nisar’s departure shows that these leaders had differences with the party,” he added.

The exodus of candidates from the PML-N has made south Punjab a shaky battleground for the party. With 12 lawmakers from the region, including a former state minister, parting ways with the party earlier this year, the jeep may well get away with a hit-and-run against the Nawaz League.

Dubai-based airline to stop serving Hindu meals on board