SSP distri­ct south says it was an incide­nt of road rage and nothin­g else
By Faraz Khan
Published: July 4, 2018
Tweet Email 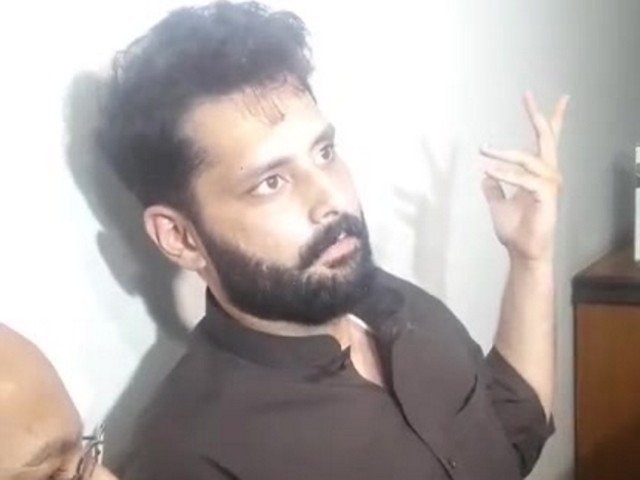 Nasir was roughed up by police personnel in the security protocol of a senior judge when he refused to make way for his motorcade on Monday. SCREENGRAB

KARACHI: Police investigators probing into the alleged beating of rights activist-turned-politician Jibran Nasir by the security escort of a Sindh High Court judge have suggested that it was an incident of ‘road rage’.

“We have received two complaints – one from Jibran Nasir and the other from the judge’s escort,” said District South SSP Omar Shahid Hamid while talking to The Express Tribune. “Our initial findings suggest it was an incident of road rage and nothing else.”

However, he said, further investigation into the matter was under way. “The escort has been provided to the judge according to law,” said SSP Hamid. “The escort reacted after Nasir blocked the vehicle of the judge, who is already facing terror threats.”

SSP Hamid said the judge was sitting in the vehicle when the incident took place and asked the escort to release Nasir after he identified himself. “It was not a matter of VIP protocol but of security threats,” he added.

“It could be wrong if some feudal or the judge’s family were sitting in the vehicle and the escort had done the same.” The officer said the rights activist might be attempting to play up the incident to gain public sympathy as he is running in the elections.

“Since Nasir had no serious [identifiable] injuries like a fracture and [open wounds], therefore there was no need to provide him with a letter for a medico-legal report,” he added.

Nasir, however, expressed his anger over the police findings. “I’m not doing this for publicity and it has no links with my political campaign. False allegations are being levelled against me. The police officers who believe it was an incident of road rage should be ashamed.”

He also demanded the release of CCTV footage of the incident. “If the police do not collect evidence, then I will do it myself to clear everything,” he said. “The judge and I, our trial should be conducted to prove who is right and who is wrong if the police believe that it was not a matter of VIP culture.”

The human rights lawyer was beaten up by the judge’s protocol and detained by police on Monday evening for “refusing to give way to the judge’s security protocol” in Karachi.

Be grateful for the slap, you could have been shot too, Jibran Nasir quotes protocol officer

The incident happened on Khaleequzaman Road near Karachi Club. Most of the incident was live-streamed by Nasir on Facebook. Nasir is running in the NA-247 and PS-111 constituencies in the elections.

Nasir’s supporters also held a protest outside the Karachi Press Club and demanded that the chief justice of Pakistan take notice of the incident and inquire what legal authority the judge’s protocol have to “criminally intimidate, threaten, harass, assault and abduct citizens”.