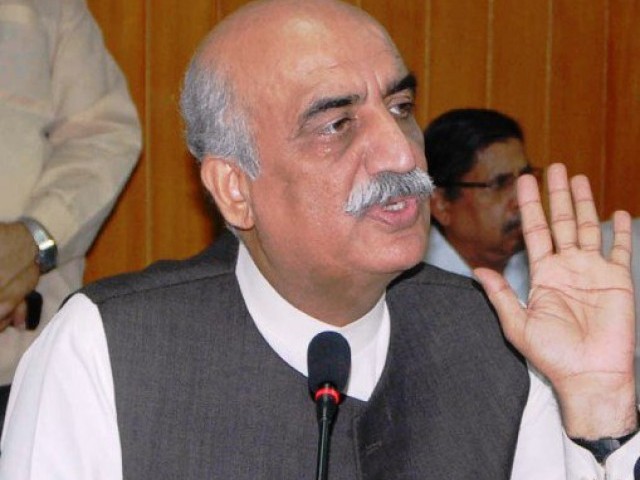 HYDERABAD: Former leader of the opposition in the National Assembly Syed Khursheed Shah has requested Chief Justice Saqib Nisar to focus on judicial reforms, instead of getting involved in the controversial issue of Kalabagh dam.

“Hundreds of thousands of cases are pending in courts which require reforms in judiciary,” Shah said, while talking to the media in Sukkur.

Reiterating his opposition to the dam, the Pakistan Peoples Party leader said the people of Sindh would not accept any decision imposed on them regarding Kalabagh dam. Sindh has resisted the Kalabagh project for around three decades and three provincial assemblies of Sindh, Balochistan and KPK have rejected the dam, he categorically announced.

Khursheed Shah ‘not ready to believe’ that Nisar will join PTI

Shah said the Election Commission of Pakistan had announced that the elections would be held amid security provided by the Pakistan Army. He cautioned that if rigging took place in spite of the high security, there would likely be repercussions for the country and a big question would be raised on the whole exercise.

The arrest of the Pakistan Muslim League-Nawaz’s candidate contesting against former interior minister Chaudhry Nisar is a deplorable act, the PPP leader said. “Children of Qamarul Islam are now leading his election campaign. Now responsibility is on the voters of the constituency to play their part,” Shah added.

The PPP leader also criticised Pakistan Tehreek-e-Insaf chief Imran Khan for allegedly prostrating at a shrine. “Khan is a charlatan politician. He can do anything to become prime minister,” he said.