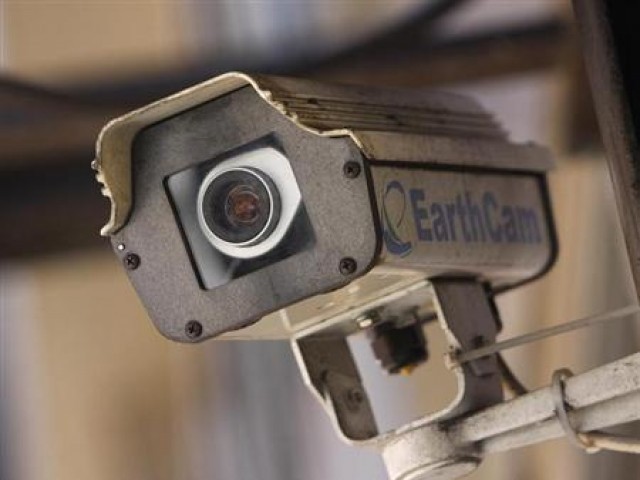 A security camera sits on a building. PHOTO: REUTERS

KARACHI: The Sindh Cabinet decided on Saturday to install 20,000 day and night vision cameras at 5,776 polling stations to monitor the process of polling and counting of votes from start to finish.

In the last cabinet meeting, the CM said, keeping in view the shortage of time till the elections, an exemption was approved from operation of Sindh Public Procurement Rules, 2009 regarding the purchase of equipment and services for video surveillance system for highly sensitive polling stations.

He said the surveillance of all polling stations was very necessary. “Since the amount [of funds] involved in the procurement of the CCTV [closed-circuit television] cameras and other required equipment was very high, I had assigned negotiation with the NRTC to the chief secretary so the entire project could be commissioned at minimum cost,” the CM told the cabinet.

Major (retd) Suleman said that NRTC had offered a rate of Rs1 million per polling station for the purchase of CCTV. “Therefore, the cost come to Rs4.15 billion for 4,154 polling stations,” he said, adding that the home department estimated a revised cost for 5,000 polling stations at Rs1.79 billion.

The chief secretary said he decided on the acquisition of CCTV cameras on a rental basis in consultation with the CM.

He said the NRTC drafted a fresh proposal of Rs915 million, excluding GST, for 5,000 polling stations comprising 15,000 CCTV cameras. He added that he constituted a four-member committee comprising Secretary General Administration (GA) Zulfiqar Shah, Home Secretary Mohammad Haroon, the IT secretary and a representative of NRTC.

Briefing the cabinet, the GA secretary said that after detailed negotiations with NRTC, the committee was able to bring down the rates from Rs915 million to Rs575 million, including GST. He added that additional concessions were also obtained from the NRTC which included an increase in the number of sensitive polling stations from 5,000 to 5,776, an increase of CCTV cameras from 15,000 to 20,000 and an agreement that 30% of all the CCTV cameras and video recorders would become Sindh government’s property after completion of the task.

Brig Ahmed told the cabinet that 20,000 day and night vision cameras of 2 megapixels in HD will be installed at 5,776 polling stations and each station will have the coverage of three CCTV cameras.

He said that there would be 5,776 equipment sets, each comprising a video recorder, 2TB hard disk, an LCD screen and1KV UPS with a wet battery.

The cabinet appreciated the efforts of the chief secretary and his team in reducing the equipment cost. It approved the project and the NRTC chairperson told the cabinet that the installation work would start from July 2. After installation, the camera accessories and other equipment, including back up system and training of the concerned staff will be handed over to Election Commission of Pakistan on July 23.

Mirza family to contest on five seats in Badin