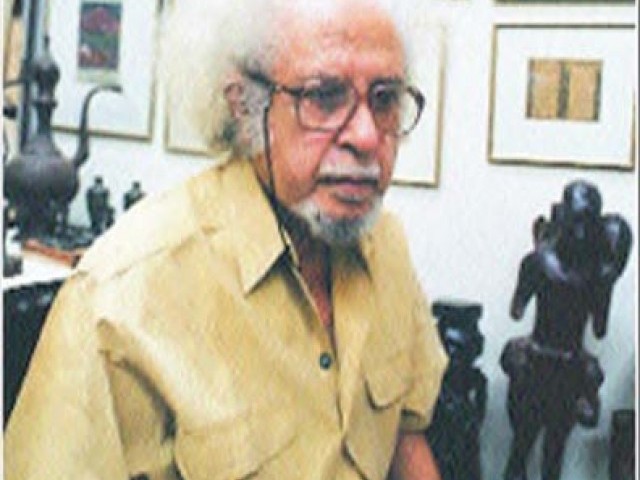 Speakers showered homage to the memory of acclaimed artist Ali Imam (1924-2002) by screening a slide-show and discussion on his life and works on his 9th death anniversary. The guests comprised primarily of college and school students.

Hosted by Pakistan National Council of the Arts (PNCA) Musarrat Nahid (who also knew the artist personally), the discussion was joined in by Prof Nargis Khalid, Prof Zarar Haider Babri and noted painter Nusrat Jee who commented on his life and art.

The slide show included examples of his early works in water-colour, later figurative pieces and personal photographs. In her concluding remarks, Nahid said: “We are here to celebrate his power and iconic presence. He lived for art and ruled the art world as a painter, collector, historian, and activist.”

Prof Nargis Khalid, one of Imam’s first students, said, “I think I was extremely fortunate to have a teacher like him. I remember how he used to silently watch my work and then told me that he was going to teach me how to ‘draw a line’ although I was a painter. It was inspiring the way he spoke about the line; it became a living pulsating thing.”

Noted teacher and critic Prof Zarar Haider Babri offered further details regarding Imam’s work and his own experience under the artist’s tutelage. “First I met him at Rawalpindi Art Council. It felt like he was a saint of art, a prophet. He was a sincere artist who used simple composition and simple technique to a masterful degree.” Babri also traced the evolution of Imam’s work — from the figureless watercolours of his’s early life to figures in oil after his time in London. He struggled to give identity to the artists and their work.

The twenties era was a blessing for art world as besides Imam other great names like Ahmed Pervez, Zubeida Agha, Khalid Iqbal, A.J. Shemza and others great painter — born these years and almost all of them went to England for study. All painters of that era were educators; Ali Imam brought that art community together sold their work.

Nusrat Jee concluded the presentation with some touching words and an account of her own studies under the artist’s auspices. “I knew him since the 70s and it was his purpose to promote art and artists.” Nusrat also disclosed some remarkable and previously unknown information: “Not many people know this but Imam Ali had a sixth sense.”