India protests with Pakistan after diplomat 'barred' from entering gurdwara

India protests with Pakistan after diplomat 'barred' from entering gurdwara 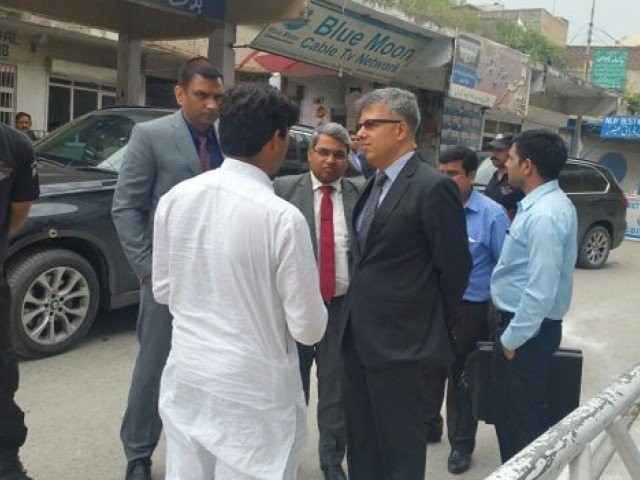 LAHORE: Indian embassy has protested with the Foreign Office after its High Commissioner Ajay Basariya was barred last week from entering a temple at Hassan Abdal amid Sikh protest.

The community barred Basariya and his wife from entering the Gurdwara Panja Sahib.

According to the embassy, they had acquired a no objection certificate (NOC) from Pakistan’s foreign office for the visit of Indian ambassadors for their meetups with Sikh pilgrims on Ranjeet Singh’s death anniversary.

On June 29, the communique said, Indian attaché and staff member Guru Sharma were scheduled to attend the central event of death anniversary at Gurdwara Dera Sahib Lahore. They had planned to bid farewell to the Sikh pilgrims on June 30, but their officers and staff weren’t allowed to enter the temples.

Conversely, Evacuee Trust Property Board (ETPB) rejected the accusations saying Indian embassy was misrepresenting the facts. It said that officials from the government or the board never barred entry of Indian ambassadors to any temple. It said that Indian attaché and his staff members didn’t descend from their vehicles and returned after they saw Sardar Gopal Singh Chawla and other Sikhs raising anti-India slogans.

On June 23, Sikh pilgrims visiting Pakistan staged a protest on the arrival of Basariya at the temple. The community had been enraged over the Indian top court’s verdict which allowed the release of film Nanak Shah Fakir across the country.

ETPB feared verbal altercations between the aggrieved Sikhs and the Indian officials which is why they requested the commissioner to go back.