Explosion kills eight Afghans as they call for peace

Explosion kills eight Afghans as they call for peace

Four also injure­d as they gather in suppor­t of peace in Logar provin­ce
By AFP
Published: June 28, 2018
Tweet Email 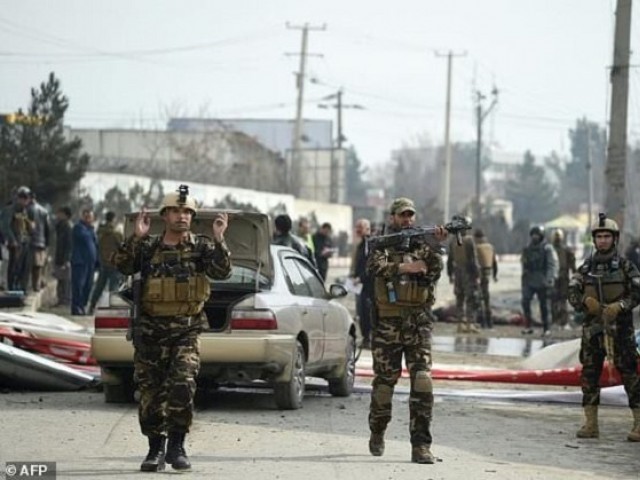 Four also injured as they gather in support of peace in Logar province. PHOTO: AFP/FILE

KABUL: A bomb killed eight people at a small gathering calling for peace in the Afghan province of Logar on Thursday, officials said, underscoring the suffering of civilians amid growing calls for an end to the conflict.

There was no immediate claim of responsibility for the blast in the volatile province south of the capital Kabul, but officials said the bomb was detonated as a crowd of war-weary locals had gathered in the district of Charkh to demand peace.

“Eight people, all of them civilians, were killed. Four more injured. They had gathered in support of peace,” Charkh district governor Mohammad Hanif Hanafi.

Shamshad Laraway, a spokesperson for the provincial governor,  confirmed the account, and said the authorities were investigating the nature of the blast.

Calls for peace have gathered steam in the war-ravaged country after the Taliban agreed to a three-day ceasefire during the Muslim festival of Eid early this month.

The ceasefire, the first in the nearly 17 years since the US invasion toppled the Taliban regime, saw unprecedented scenes of Taliban fighters and security forces hugging and taking selfies together around the country.

The insurgents returned to the battlefield last week after refusing a government request to extend their ceasefire over Eid, though calls for peace by the Afghan public have been growing.

Earlier this month dozens of activists from southern Helmand province arrived in Kabul after marching hundreds of miles on foot to call for an end to the violence.

On Wednesday, another 25-member group of Afghans arrived in Kabul from the remote north-eastern Kunar province, while earlier in the week, some 15 protesters reached the capital after trekking all the way from the border with Pakistan to join the calls for an end to the bloody conflict.