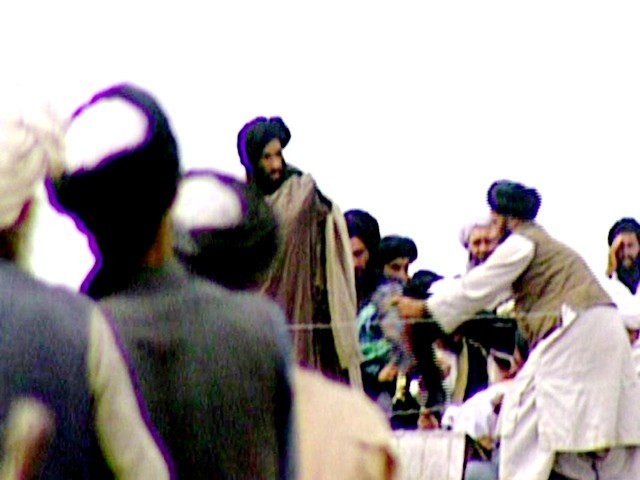 KABUL: The Taliban in Afghanistan rejected on Monday unsourced media reports that its leader, Mullah Mohammad Omar, had been killed in Pakistan, saying he is alive and in Afghanistan.

Following are some questions and answers about the reclusive, one-eyed Mullah Omar, his background and motives.

Most reports have it that Mullah Omar, an ethnic Pashtun, was born into an impoverished family in the town of Nodeh in Afghanistan’s southern Uruzgan province, some time between 1959 and 1962.

After studying at several Islamic schools, he emerged as a Muslim cleric. After the Soviet invasion in 1979, he joined the jihad, or holy war, and was appointed a commander of the anti-Soviet Mujahideen guerrillas, losing his right eye to shrapnel in fighting.

In 1996 Omar was named the Amir ul-Moemineen, “Commander of the Faithful”, by a group of Islamic scholars made up of Taliban — the once ragtag group of fighters that he helped found in 1994 ostensibly to combat post-war lawlessness.

He effectively ruled Afghanistan from his base in Kandahar, rather than the capital Kabul, for five years. His refusal to surrender the fugitive Osama bin Laden to the United States after the September 11 attacks led to US-backed attacks that toppled the Taliban.

He is believed to have been hiding in Pakistan more or less since then, and carries a $10 million bounty on his head from the United States. Though believed to have formed certain alliances with al Qaeda, the son of the late Osama bin Laden, Omar bin Laden, told Reuters a year ago that while his father and Mullah Omar were friendly, they maintained separate agendas.

How does he operate?

Though the Taliban is splintered and made of many factions, all the Taliban acknowledge Mullah Omar as their supreme leader who wields control through the supreme leadership council, or the shura, a 22-member body which he leads.

Among those on the shura are leaders of powerful regional groups, close associates of Omar as well some relatively unknown figures. Some others in the past have put the strength of the shura at 10, indicating just how little is known about the top decision-making body.

Omar is the figurehead of the Quetta shura, which is considered the most powerful, directing the deadly insurgency in southern and western Afghanistan, ex-Taliban have said. The shura provides “much of the intellectual and ideological underpinning” of the insurgency in Afghanistan”, according to retired US commander Lieutenant General David W Barno.

Afghan President Hamid Karzai has in the past offered Omar guaranteed safety in return for ending the Taliban’s increasing violence.

Today, he is seen as crucial to Karzai’s peace plan, which includes negotiating and reconciling with some Taliban leaders. Washington and NATO have reluctantly backed the talks.

Last year saw the worst violence since the Taliban were overthrown in 2001, with record casualties on all sides. NATO is eyeing a full handover of security responsibilities to the Afghans by the end of 2014.

One of Kabul’s requirements in the peace talks is the Taliban renounce all contact with al Qaeda. The Taliban have said they will not negotiate with Karzai while foreign forces — currently numbering up to 150,000 — are in Afghanistan.

Omar himself has repeatedly rejected the talks, saying they were an attempt to “throw dust in the eyes” of the Afghans.

Who are the Pakistani Taliban?