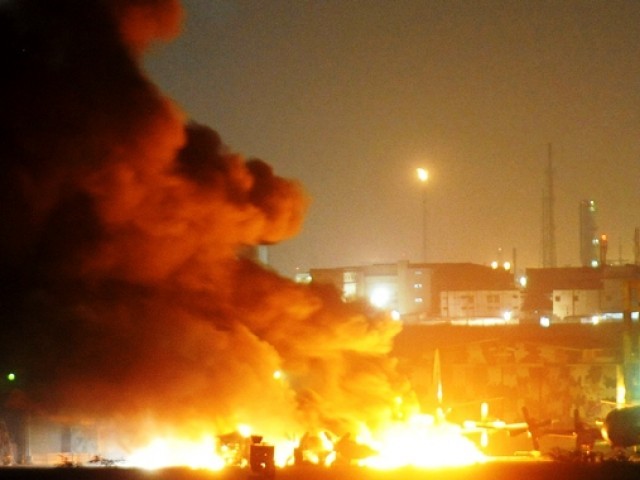 Flames and smokes belches out from a Pakistani military air base after an attack by militants in Karachi on May 22, 2011. Militants stormed one of Pakistan's biggest military bases in the country's largest city late May 22, triggering explosions and gunbattles. At least 10 people were wounded as blasts and gunshots rang out at the sprawling base used by the Air Force and Navy in the centre of Karachi, where the local government confirmed that the base was under "terrorist attack". PHOTO: AFP

Intelligence reports had warned police and other security agencies that terrorist outfits, including the banned Tehreek-e-Taliban Pakistan (TTP), were planning to carry out such attacks on army, navy and air force installations.

The report had suggested that the TTP was very likely to mount attacks like the one they carried out, targeting a navy bus on April 26 in Karachi.

The federal interior ministry had issued an alert, warning police and other law-enforcement agencies to beef up security across the country.

Sources said that the despite ample intelligence warnings and a security alert issued by the interior ministry, Sunday’s attack had occurred because of a security breach.