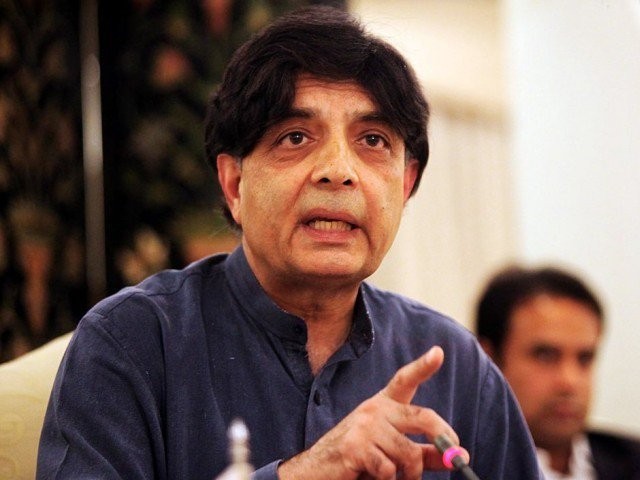 Nisar has announced to contest the elections as independent candidate. PHOTO: FILE

Earlier, Nisar submitted his nomination papers as an independent candidate on all the four seats.

On Saturday, PML-N announced most of its candidates for the general elections but held back announcements for the four seats Nisar is contesting for, which led to speculations that the party was willing to award tickets to Nisar.

Moreover, Nisar on Friday had visibly softened his hard-hitting stance against former prime minister Nawaz Sharif and his daughter Maryam Nawaz. Nisar mostly avoided criticising Sharif or his daughter and said that he was not ‘angry’ with the PML-N leadership, but rather that his differences with the Sharifs were principled.

However, PML-N’s announcement to move candidates against Nisar laid to rest the suggestions of possibile reconciliation between Nisar and the PML-N leadership.

“The point of reconciliation has passed. [Nisar] took hostility with the party leadership to the point where there was no retreat—to the point of no return,” said a party source with knowledge of the matter.

He reminded that Nisar had decided to continue strong criticism of the Sharifs at a time when the former premier’s wife is fighting for her life at a hospital in London. He added that Nisar’s criticism at such perilous times left him with lack of support even among those that were earlier at his side. It is learnt that the former interior minister had to soften his tone, sensing the backlash.

“Nisar knew that returning to the PML-N fold was no longer a possibility, but he did not want the party to field a candidate against him, which is why he adopted a somewhat reconciliatory tone, but it did not help,” said a PML-N senior leader. He added that PML-N candidates contesting on all four seats is “a big blow to Nisar.”

Sources said the former interior minister is concerned that his contest with PML-N would benefit Pakistan Tehreek-e-Insaf (PTI) candidates, especially heavyweight Ghulam Sarwar Khan who is contesting from NA-59 and NA-63. PTI candidates for PP-10 and 12 are yet to be finalised.

Sources within the party said that Shehbaz was in favour of awarding the party ticket to Nisar or at least not field PML-N candidates against Nisar but his elder brother rejected the idea.

“Nawaz Sharif is angry about the way Nisar criticised him and his daughter in the past few days and has offended the party leadership,” said a PML-N senator requesting anonymity adding “They believe that Nisar should be cut down to size which is why he has not been given the leverage to not face candidates on the four seats.”

Earlier, Nisar had come down hard on his party leadership while indirectly addressing former premier Nawaz Sharif.  “I ask the people of Jati Umrah to not ridicule themselves by staging such dramas and not to ridicule me either,” the minister said in a statement.

His statement came in the backdrop of the reports that PML-N had linked the award of tickets to Nisar with his appearance before the party’s parliamentary board for an interview.

The former interior minister’s criticism is said to have offended the former PM and his aides who were considering to formally expel Nisar from PML-N by terminating his basic membership. However, Nisar anticipated the ‘hostile designs’ of N-League leadership and announced he would part ways with the PML-N during a charged speech a few days back.