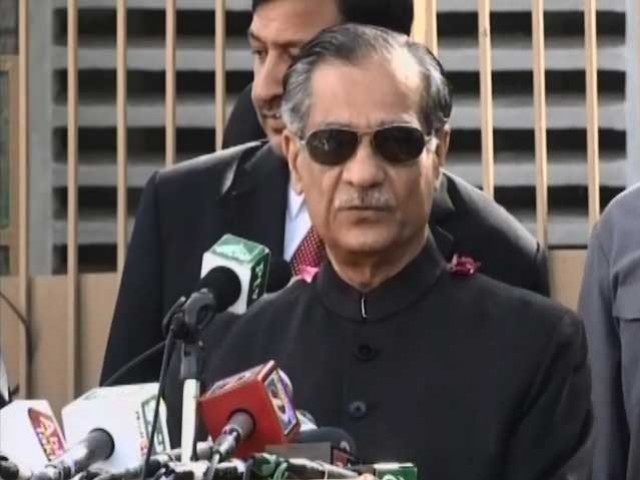 The top judge issued these orders during his visit to district courts in Larkana on Saturday, where some people came up to him with complaints of their relatives being missing and their whereabouts still unknown, said a press release issued by the Supreme Court.

Chief Justice Mian Saqib Nisar in his visit to district courts met judges, lawyers and litigants and witnessed court proceedings, inspected case files, observed court procedures and heard in detail grievances of people and hardships faced by litigants and lawyers and facilities extended to them in court premises. He also visited judicial lockup and heard complaints and issues of under trial prisoners.

He also directed the judges to decide cases expeditiously in accordance with law and asked lawyers to appear in cases regularly and avoid undue and frequent adjournments. During the court proceedings, the top judge questioned the judges presiding over the courts and pointed out the shortcomings and discrepancies.

The CJP also visited government hospital Sukkur, Chandka Medical College Hospital Larkana and Sheikh Zayed Women’s Hospital, Larkana where he met patients and heard their complaints expressing dissatisfaction over the dreadful situation of hygiene and cleanliness. He directed the hospital administration concerned to improve it and address the complaints of patients.  Commenting on his visits to the government hospitals in these districts, he said the purpose is to protect the invaluable human lives. “Why shouldn’t we take the notice when the matters are related to protection of the human lives and health”.

He informed that chief secretary Sindh has been directed to submit a detailed report to the SC about the state of health facilities in Sindh. The report will have to essentially contain details about the strength of staff and doctors in the government hospitals, free medicines and medical equipment and machines.

During his visits, the CJP also observed and received complaints from patients and their attendants about non-availability of doctors, paramedics and medicines as well as the medical equipment and machines. He acknowledged that the health services in Khyber-Pakhtunkhwa have instituted more reforms than any other province.  Justice Nisar also found fault with private medical colleges and universities charging exorbitant fee and pointed out shortage of doctors in the country.

Moreover, taking notice of excessive and unscheduled load shedding in hospitals, he directed WAPDA authorities to make hospitals free from load shedding so that patients can get better treatment.

While addressing the legal fraternity, the chief justice said he has been taking suo moto notices to provide fundamental rights to the people of Pakistan as he contended that notices over health, water, environment and education are meant to protect the life of citizens. He said many problems are afflicting the people while violating their fundamental rights. “I can’t sit over this silently”, the chief justice remarked.

Speaking about the legal reforms, he said a large number of cases pertaining to the public law and the administrative law are pending hearing in the apex court as well as the high courts. According to him, around 1.6 million cases are pending in the country’s courts. He underscored the need for legislation for new laws as many old laws have complicated dispensation of justice.

The CJP said the selection of Justice (retd) Amir Hani Muslim to head the Supreme Court mandated water commission in Sindh has proved to be correct. He expressed hope that compliance with the commission’s order will begin to show results in around three months. He also cautioned the lawyers about impending water crisis in Pakistan. “The people have no idea what is looming.” He told that he has started a campaign in this regard, adding that he will not budge if he has to implore the lawyers for help in his efforts.

The CJP was also scheduled to visit Manchar lake but the program was later cancelled. The local people and some of the litigants pleading a case against the lake’s pollution in the apex court waited for him for around four hours before they came to know about the cancellation. Meanwhile, the top judge later paid visit to the shrine of Hazrat Lal Shahbaz Qalandar (RA) in Sehwan along with his wife. During the visits local people and government servants approached justice Nisar with complaints and requests for taking suo moto notices over their problems.

After all these visits, Chief Justice observed that apathy of the government is evident and reflects poorly on the pathetic state of governance in the province. He observed that all government departments need to put their act together in order to provide relief to the general public and serve them in the best possible way. (with additional input from APP)