Populi­sm is not the answer to the world's immigr­ation proble­ms, says Pope
By Reuters
Published: June 20, 2018
Tweet Email 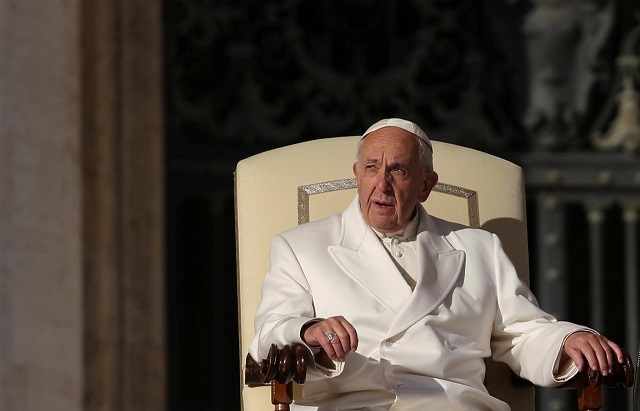 VATICAN CITY: Pope Francis has criticised the Trump administration’s policy of separating migrant families at the Mexican border, saying populism is not the answer to the world’s immigration problems.

Speaking to Reuters, the Pope said he supported recent statements by US Catholic bishops who called the separation of children from their parents “contrary to our Catholic values” and ‘immoral’.

“It’s not easy, but populism is not the solution,” Francis said on Sunday night. In a rare, wide-ranging interview, the pope said he was
optimistic about talks that may lead to a historic agreement over the appointment of bishops in China, and said he may accept more bishops’ resignations over a sexual abuse scandal in Chile.

Reflecting at his Vatican residence on his five years as pope, he defended his leadership of the Roman Catholic Church against criticism by conservatives inside and outside the Church who say his interpretation of its teachings is too liberal.

He also said he wanted to appoint more women to top positions in the Vatican administration. One of his most pointed messages concerned President Donald Trump’s zero-tolerance immigration policy, in which US authorities plan to criminally prosecute all immigrants caught crossing the Mexican border illegally, holding adults in jail
while their children are sent to government shelters.

The policy has caused an outcry in the United States and has been condemned abroad as videos emerged of youngsters held in concrete-floored enclosures and an audio of wailing children went viral. US Catholic bishops have joined other religious leaders in the United States in condemning the policy. “I am on the side of the bishops’ conference,” the pope said, referring to two statements from US bishops this month. “Let it be clear that in these things, I respect [the
position of] the bishops conference.”

Francis’ comments add to the pressure on Trump over immigration policy. The pope heads a church which has 1.3 billion members worldwide and is the largest Christian denomination in the United States.

The president has strongly defended his administration’s actions and cast blame for the family separations on Democrats. “Democrats are the problem,” Trump said on Twitter on Tuesday. “They don’t care about crime and want illegal immigrants.”

The US crackdown chimes with a new political mood sweeping
western Europe over the large numbers of migrants and asylum-seekers, most of them escaping conflict and poverty in the Middle East and Africa. The pope said populists were “creating psychosis” on the issue of immigration, even as ageing societies like Europe faced
“a great demographic winter” and needed more immigrants. Without immigration, he added, Europe “will become empty.”

Church’s future “On the Street”

Canada ‘troubled’ by US separation of migrant families: minister

Since assuming the papacy in 2013, Francis has promoted a
liberal interpretation of Catholic teachings at a time when politics in many parts of the West have shifted towards economic nationalism. He has faced internal opposition from conservative clergy who oppose his liberal interpretations, especially his approach to sexuality and showing mercy towards divorced Catholics. But the pope said he prayed for conservatives who sometimes said “nasty things” about him.

Defending his leadership, the 81-year-old Argentine pontiff said the future of the Catholic Church was “on the street”. He said he wanted to appoint more women to head Vatican departments because they were better at resolving conflicts, though this should not lead to what he called “masculinism in a skirt”.

He spoke at length about immigration, a controversial issue in Europe as well as the United States. The populist Italian government has refused port access to non-government ships that have been rescuing asylum-seekers trying to cross to Italy from Africa in flimsy boats. One ship was forced to disembark more than 600 migrants in Spain at the weekend. Italy’s interior minister, Matteo Salvini, who is also leader of the far-right-wing League party, has criticised the pope in the past, once saying the pontiff should take in migrants in the Vatican if he was so concerned about them. “I believe that you cannot reject people who arrive. You have to receive them, help them, look after them, accompany them and then see where to put them, but throughout all of Europe,”

Francis said. “Some governments are working on it, and people have to be settled in the best possible way, but creating psychosis is not
the cure,” he added. “Populism does not resolve things. What resolves things is acceptance, study, prudence.”

Some struggles and Tough Decisions

Francis said he was saddened by Trump’s decision last year to implement new restrictions on American travel and trade with
Cuba. The move rolled back his predecessor President Barack
Obama’s opening to the island nation. That deal, which the
Vatican helped broker, “was a good step forward”, the pope said.

He also said Trump’s decision to pull out of the Paris agreement to curb climate change caused him “a bit of pain because the future of humanity is at stake”. The pope said he hoped Trump would re-think his position. Rejecting criticism that he is at risk of selling out Chinese Catholics loyal to the Vatican, Francis said talks to resolve a dispute over the appointment of bishops in China-an obstacle to resuming diplomatic ties-were “at a good point”.