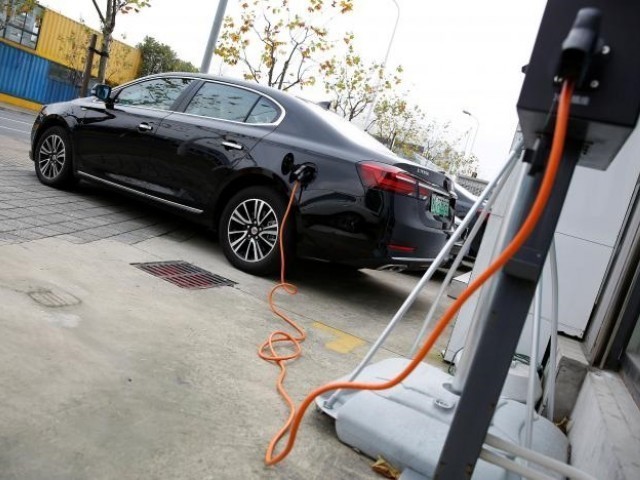 The company had not yet devised any plan for setting up charging points for electric cars, but when demand would rise, it may establish charging units at its existing filling stations PHOTO: REUTERS

KARACHI: Shell Pakistan has planned to invest $15 to $16 million in its retail stations in the wake of expectations of an increase in vehicle sales as more automakers enter Pakistan and activities under the China-Pakistan Economic Corridor (CPEC) gain momentum.

The company is pouring fresh capital in an effort to strengthen its presence in existing areas of operation as well as along CPEC route.

Owing to the new Automotive Development Policy (ADP 2016-21), nearly a dozen automakers are entering into Pakistan’s industry encouraged by the incentives offered in the policy and the positive outlook on the country’s economy.

According to JS Research, the new entrants will add 60% to the industry’s production capacity over the next few years. “The law and order situation has been improving for the last four or five years that has also helped expand the economy. Cars and motorcycles are increasing. So, yes it is a response to the demand pull as well as forecast increase in demand investment,” said Shell Pakistan Head of External Relations Habib Haider.

He pointed out that the company had not yet devised any plan for setting up charging points for electric cars, but when demand would rise, it may establish charging units at its existing filling stations.

In the budget for fiscal year 2018-19, the government has tried to promote electric cars in order to pave the way for an increase in the use of environment-friendly vehicles. Electric cars are not run on petrol, thus they do not add to the global warming, which is a major concern for world leaders who are struggling to restrict a rapid rise in global temperatures.

In the budget, 16% customs duty on charging stations for electric vehicles has been withdrawn. Customs duty on the import of electric cars has also been reduced from 50% to 25%, in addition to exemption from 15% regulatory duty.

Import duty on completely knocked down (CKD) kits for the assembly of electric cars in the country stands at 10%.

According to the International Energy Agency, sales of electric cars around the world rose 54% in 2017.

Shell Pakistan has also a 26% share in a white oil pipeline project, which will be laid from Karachi to Mehmoodkot near Lahore and is estimated to cost around $125 to $150 million.

The pipeline is aimed at ensuring a smooth flow of oil without any interruption and will bring down the demand for oil transportation through tankers. Pak Arab Pipeline Company (Papco) is a major shareholder in the project with 51% stake.