Trump doubles down on family separations as border crisis rages

Trump doubles down on family separations as border crisis rages 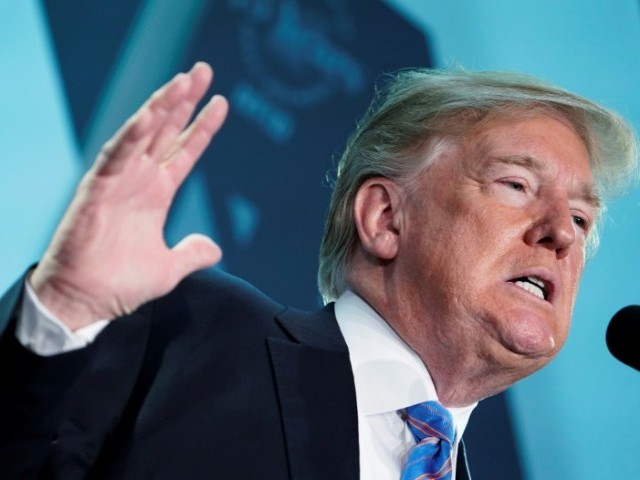 WASHINGTON: A defiant US President Donald Trump doubled down on Tuesday on his administration’s controversial policy that leads to separating migrant children from their parents, as he prepared to face congressional Republicans alarmed by an intensifying crisis on America’s southern border.

While top officials have also stood by Trump’s “zero tolerance” approach, insisting children are being held in humane conditions, criticism has swelled from international rights groups, Christian evangelicals, former US first ladies and the president’s own Republican Party.

Lawmakers who have visited minors in detention in Texas and California describe crying children held in cage-like conditions behind chain-link fencing, with no idea when they will see their parents again.

But a defiant Trump sounded unfazed by the mounting pressure to alleviate the situation before it ruptures into a public relations disaster for his party.

US ‘will not be a migrant camp’: Trump

“I don’t want children taken away from parents,” he told a gathering of small business owners, before adding: “When you prosecute the parents for coming in illegally, which should happen, you have to take the children away.”

“We don’t have to prosecute them, but then we are not prosecuting them for coming in illegally. That’s not good.”

After his remarks, the president raised eyebrows by walking across the stage, arms outstretched, and embracing a US flag.

Trump has accused Democrats of provoking the current crisis by blocking legislation to combat illegal immigration.

“Democrats are the problem,” he tweeted early Tuesday, charging that his opponents “don’t care about crime and want illegal immigrants, no matter how bad they may be, to pour into and infest our Country.”

With influential Republicans including senators John McCain and John Cornyn demanding an end to the separations, the House of Representatives is expected to consider two immigration bills.

One is a hardline measure favoured by conservatives, and is unlikely to pass.

The other is a compromise bill that would end family separations, protect so-called Dreamer immigrants brought to the country illegally as children, pay for boosted border security, and curtail legal immigration.

But Trump himself put that bill in doubt.

“We have a House that is getting ready to finalize an immigration package that they’re going to brief me on later, and then I’m going to make changes to it,” Trump said, without providing details about what he plans to change.

A group led by Senator Orrin Hatch have written Attorney General Jeff Sessions demanding a pause to the separations, while Senator John Cornyn was drafting what he called “emergency” legislation — backed by leadership — that would allow family units to remain intact during adjudication of their cases.

The United Nations has slammed the separation practice as unconscionable, while Amnesty International blasted it as “nothing short of torture.” Mexico’s foreign minister condemned it as “cruel and inhuman.”

Protesters also demonstrated outside the Customs and Border Patrol headquarters in Washington, where faith leaders lambasted Sessions’ recent use of biblical verse to defend Trump’s call to obey the law even if it results in the separations.

Tuesday’s huddle between Trump and Republican lawmakers will be closely watched, in part to see whether any of them dare to directly confront the president.

Several House Republicans face tough re-election fights in November, and some may worry that public outrage over the family separations could hurt their chances.

Democrats say the crisis is of Trump’s own making, and accuse him of using children as pawns.

“This has caused an outcry throughout the country,” said Senator Chris Van Hollen, who visited a detention facility in McAllen, Texas over the weekend where some 1,500 children are being held.

US officials say more than 2,300 children have been separated from their parents or guardians since early May, when the administration announced its “zero tolerance” push to arrest and charge anyone illegally crossing the US-Mexico border, regardless of whether they were seeking asylum.

Since children cannot be sent to the facilities where their parents are held, they are separated from them.

“Mommy! I want to go with Dad,” a young girl is heard crying out.

Separated children make up a minority of immigrant minors in US custody.

The Department of Health and Human Services said there are currently 11,700 children under its care in 100 shelters across 17 states.

The majority crossed the border without their parents.

US public opinion appears divided along partisan lines on the family separations, with two-thirds of all voters opposed, but 55 per cent of Republicans supporting the policy, according to a Quinnipiac University National Poll.

Sessions was forced Monday to rebut comparisons to the policies of Nazi Germany — which he called “a real exaggeration.”

But activists seized on the symbolism.

“Holding children hostage in concentration camps is the new political bargaining chip of this administration and it is unconscionable,” Kristen Clarke, head of the Lawyers’ Committee on Civil Rights, told reporters outside the US Capitol.

Democrats have reminded Trump that he campaigned in 2016 saying “I alone can fix it,” but now is punting to Congress.

“Mr. President, you alone can fix it… with the flick of a pen,” Senate Minority Leader Chuck Schumer said.

Canada ‘troubled’ by US separation of migrant families: minister