Trump has destro­yed the work done over a period of 70 years, leavin­g all countr­ies to fend for themse­lves
By Shahid Javed Burki
Published: June 19, 2018
Tweet Email 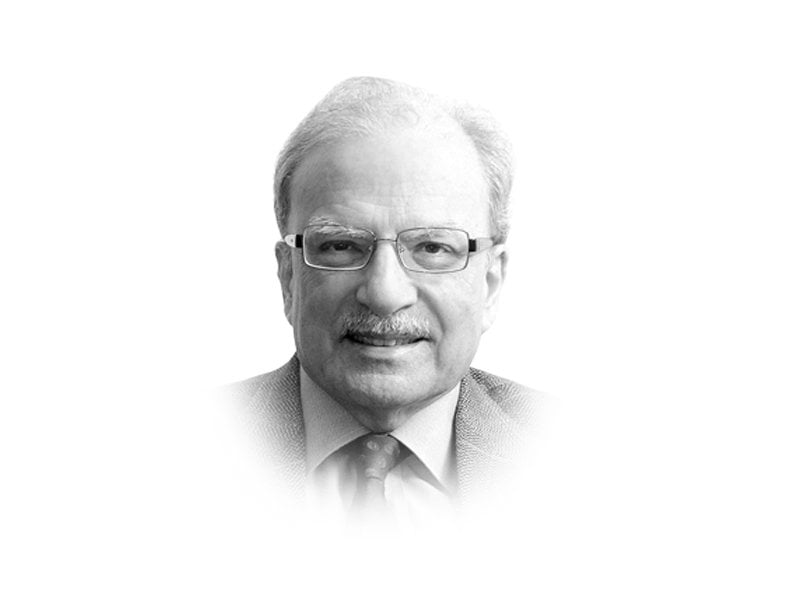 The 2018 annual meeting of the Group of 7 was held in Canada at a resort near Quebec City. The two-day meeting concluded on June 9, with President Trump departing early to begin his journey to Singapore where he was scheduled to meet Kin Jung Un, the North Korean president. Before he took the flight, it was announced that the summit had been a success and the leaders had signed a joint statement. Not so, said the American president in a series of tweets he sent out from his plane. Not only that, he tweeted insults aimed at other G7 leadership, in particular the host of the summit, Canadian Prime Minister Justin Trudeau. He called him “very dishonest and very weak.” What provoked the presidential ire? It was seen coming for several months, from the time Trump moved into the White House in January 2017. Trump had figured that there was a large segment of the American population that believed that the much-lauded process of ‘globalisation’ had done them a great deal of harm.

For a bit more than 40 years, from 1944 to 1995, the world leadership was engaged in constructing a global order that would ensure fair play for all countries and people. The Bretton Woods conference held at a resort in New Hampshire, United States, set the process in motion. The process concluded half a century later with the establishment of the World Trade Organisation in 1995 following the signing of a trade agreement in Marrakesh, Morocco. There were three basic planks on which the global order was constructed. First, no country, no matter its size and power, would dominate the system. Second, decisions made would be taken by all participating countries working together. Third, the global order would cover several aspects of life. These included economic and social behaviour, matters pertaining to politics and protection of what were regarded as human rights.

Since it would be complicated to house all these concerns in one institution, a number of separate entities would be created to watch over them. This led to the establishment of such institutions as the United Nations system, the International Monetary Fund, the World Bank and the associated regional banks, and finally the World Trade Organisation.

The effort begun in 1944 with the Bretton Woods conference dealt with a relatively simple world. Two European nations, Britain and France, controlled much of the world, governing dozens of colonies in Africa and Asia. Their eventual withdrawal resulted in the independence of scores of countries. The world became diverse and complicated. While the old order had produced peace and prosperity for the globe, it did not do away with crises. These occurred periodically. How to respond to them? Some thinkers in the developing world, including Pakistan’s Mahbubul Haq, advanced the notion of the New International Economic Order (NIEO). The NIEO was too radical a move to be accommodated by the major players in the system. They came up with the creation of number of country groups. A group of seven large industrial and democratic nations began to meet annually to review the global situation and agree on collective action. The G7 included, in alphabetic order, Canada, France, Germany, Italy, Japan, the United Kingdom and the United States. Once the Soviet Union collapsed and the successor state of Russia seemed to be moving towards democracy and liberal capitalism, it was admitted into this club and G7 became G8. However, in 2014, Russia was expelled when it used military force to annex the Crimean Peninsula from Ukraine. This was a clear violation of one of the established norms of international behaviour: that force would not be used to bring about changes in national boundaries.

Not having made much progress with the NIEO idea, developing countries came together and formed their own grouping, the Group of 77. The G77 had all developing countries as members, not counting those that were under the control of or allied with the Soviet Union. But it made little sense to have separate groups of rich and poor nations, the G7 and G77. A select group of developing nations joined the rich countries to form the Group of 20. The G20 for a time played an important role. At a meeting held in London in 2007 while the world was faced with a debt crisis, the G20 agreed to provide additional capital to the IMF to rescue those states that were faced with extreme distress. During his first visit to Asia in November 2009, Barack Obama, the newly-installed president of the United States, suggested close cooperation with China which was then the second-largest economy in the world. He seemed to be suggesting a kind of G2 which would take major decisions in global matters with details to be worked out by the G20. To Obama’s tidy mind, a hierarchical system of global governance made a great deal of sense. But Trump, his successor, had put ‘America First’ in all global affairs.

There were immediate reactions to Trump’s blowup at Quebec from the political and policy world. “Trump is readier to give a pass to countries that pose a real threat to Western values and security than to America’s traditional allies,” said Peter Westmacott, a former British ambassador to Washington. His reference, of course, was to the soft corner Trump had for Russia and its president, Vladimir Putin. On his way to Quebec, Trump had suggested that Russia should be admitted once again to the rich-countries’ club and the G7 should become G8 again. “If there is a method to madness on the part of the American president, it is currently well hidden,” said British Foreign Secretary Boris Johnson. With these moves, Trump has destroyed the work done over a period of 70 years, leaving all countries to fend for themselves.