PTI will not enter in any coalition: Qureshi

PTI will not enter in any coalition: Qureshi 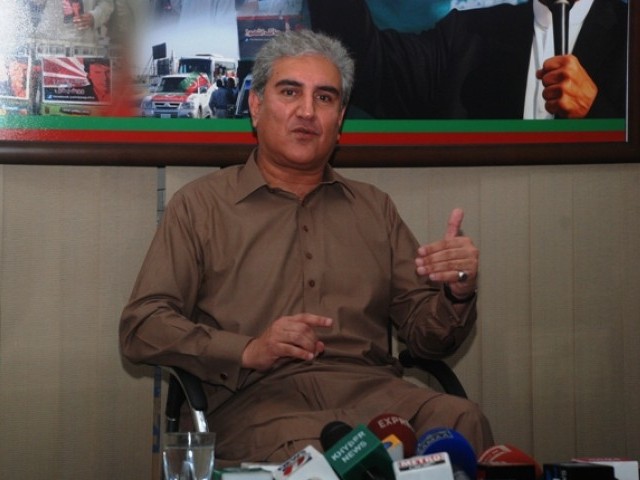 The PTI leader said his party can form an elections alliance with any political party which is contesting against the PPP in Sindh. PHOTO: PTI

“We will not enter in such a coalition,” he vowed at a press conference on Monday in Tharparkar district, which he addressed after appearing before the returning officer of NA-221 constituency for scrutiny of his nomination paper.

Former Sindh chief minister and Grand Democratic Alliance’s leader Arbab Ghulam Rahim was sitting by his side during the conference. Qureshi reiterated that the wave of change has entered Sindh after Khyber-Pakhtunkhwa (K-P) and Punjab. “The elections results in Sindh will surprise the people.”

The PTI leader said his party can form an elections alliance with any political party which is contesting against the PPP in Sindh.

“An alliance has already been formed among Hurr Jamaat of Pir Pagara, Sarwari Jamaat of Makhdooms of Hala and our Ghausia Jamaat. We will support each other’s candidates in Sindh,” he declared.

He accused PPP’s co-chairman Asif Ali Zardari and his sister Faryal Talpur of weakening party in Sindh after its near wipe-out from Punjab and other provinces.

“The PPP’s leaders and supporters of PPP who stood firm during the repressive regimes of Gen Ziaul Haq and Gen (retd) Pervez Musharraf are now leaving the party thanks to Zardari and Talpur,” he alleged. “Zardari has buried the ideology of Zulfikar Ali Bhutto.”

He expressed hope that Imran Khan will be elected as the prime minister after 2018 elections and vowed that the corrupt political elements including the PPP’s leadership will be held accountable.